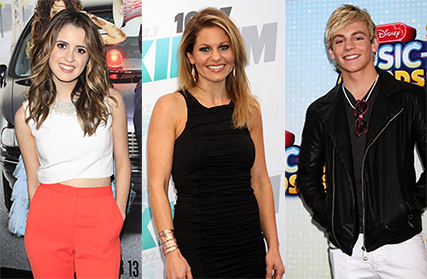 Whoa whoa whoa, how is it already April?! Wasn’t it just St. Paddy’s Day? While the months are slipping by for us, our fave celebs have been getting down to business. From new albums being released to rumors about upcoming movies, this week had it all!

We’re hoping that this announcement wasn’t an April Fool’s joke, because rumor has it there is a Full House spin-off in the works. Netflix has reportedly ordered 13 episodes of Fuller House, a series set to have Candace Cameron Bure and Andrea Barber reprise their roles as D.J. Tanner and Kimmy Gibbler. The show will be about D.J. and Kimmy living as adults and figuring out life together. We’re hoping that the whole Tanner clan will make an appearance at least once during this awesome revival. We don’t know too much else about this project just yet, but we can’t wait to know more.

Austin & Ally "Take It From The Top"

After Austin & Ally won big at the Kids' Choice Awards last week, the good news for A&A fans keeps on coming. The show has just released a new EP on iTunes with songs specifically picked by Laura Marano and Ross Lynch. The two put their top five fave new songs on the album, including their amazing duet, "Can’t Do It Without You." We know what we’re going to be blasting all weekend long.

With an upcoming Beauty and the Beast film following the new live-action Cinderella's success, Disney has since announced that Mulan will also be joining the world of fairytale adaptations. So far the only news about Mulan has been that a script is ready, but we've already started fancasting our favorite stars. We can’t wait to see how our favorite characters are brought to life and who is going to be honored with the role of Mulan.

When Kelly Clarkson auditioned for American Idol 13 years ago, she had no idea how much her life was going to change. Wednesday night, Kelly went back to her roots to perform for the Top 8 hopefuls in this year's competition. Each contestant was challenged with singing a Kelly Clarkson hit and received feedback from the mega-star herself. If that wasn’t amazing enough, Kelly performed her original audition song from 2002, "At Last" by Etta James, on the stage where she was crowned the original American Idol. Talk about a walk down memory lane.