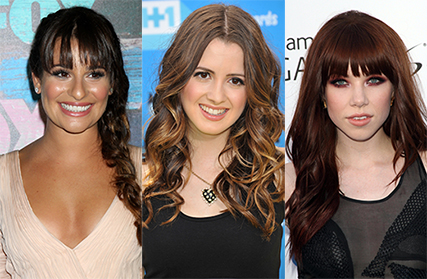 Another week, another jam-packed seven days of our fave celebs doing some awesome things. Who do we have to say good-bye to and who is supporting their friends? Read on to find out.

Aaaand cue the waterworks. When all the stars from Austin & Ally took to Instagram and Twitter share that they had their last table read for the show, we couldn’t help but get a little misty-eyed. After four years of watching the gang get into all sorts of crazy situations, we just can’t believe it's coming to an end. Although they had their last table read, luckily there are still two weeks left of filming, which means we’re bound to see some stellar (and sappy) behind-the-scenes pics. If you're lucky for us, we'll be glued to our phones so we don't miss anything.

It’s no secret that Lea Michele has had a stellar year between the series finale of Glee, filming her upcoming show Scream Queens and her debut album still rocking our playlists. But Scream Queens isn't her only new project — she’s also back in the studio working on that second album she promised us last year. Lea shared a super fun pic on Instagram of her working on her music, writing, "I'm so excited and beyond grateful to be where I am in my life today feeling so strong and happy.. I can't wait to put all of that into this next record," and we can’t wait to hear what she has for us this time around.

Yep, the rumors are true: Doctor Who is making its way to Disney XD! The mega-popular TV show is airing episodes from Season 2 of the modern Who series starring David Tennant. If you don't have BBC or have never seen the show before, watch out, because this is one series jam-packed with action and adventure. Episodes begin airing on Saturday, June 13th and continue through June 20th after the premiere of season two’s "New Earth" on May 9th.

This past week has been full of pictures and rumors swirling about Taylor Swift’s in-progress music video. From Zendaya to Selena Gomez to Cara Delevingne, T. Swift’s video (reportedly for her next single, "Bad Blood") looks like it’s going to be pretty incredible — and star-studded. Plus, on top of all that girl power, the hair and make-up looks we've seen seem extra fierce. We're still waiting for the official word, but we're keeping our eyes peeled.

Remember when Carly Rae Jepsen’s "Call Me Maybe" came out and a celeb-packed lip-sync started by Carlos PenaVega went viral? Well, it’s happening again, but this time it’s for Carly’s new hit, "I Really Like You." Made by Justin Bieber, Ariana Grande and a bunch of their friends and family, the vid features dancing, singing and some hilarious moments. Biebs, Ari and Carly are all on the same label, and we totally heart how much Justin and co. supporting their fellow friend and artist. Check out their video here.