Things get pretty (and) evil in the new Scream Queens trailer 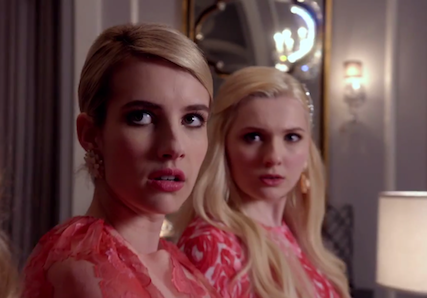 Horror's hot these days, and everyone's ready to get scared. Just a few days after we saw MTV's star-studded Scream promo, Fox is releasing a slasher trailer of their own for the new show Scream Queens.

From the creators behind the hit shows Glee and American Horror Story, Ryan Murphy and co. bring this new terrifying series to TV and it's starring basically all of your faves. Seriously, Scream Queens doesn't just have Emma Roberts and Ariana Grande, it also stars Lea Michele, Skylar Samuels, Keke Palmer, Abigail Breslin and even our June/July cover girl Grace Phipps. Plus, there are also hotties Nick Jonas and Diego Boneta as well as Jamie Lee Curtis who found fame after starring in a bunch of frightening flicks back in the day.

Scream Queens tells the story of a serial killer on campus terrorizing a college sorority, but you can check it out for yourself below.

What do you think about Scream Queens so far? Which star are you most excited to see? Tell us in the comments.

Photo and video credit to: Fox