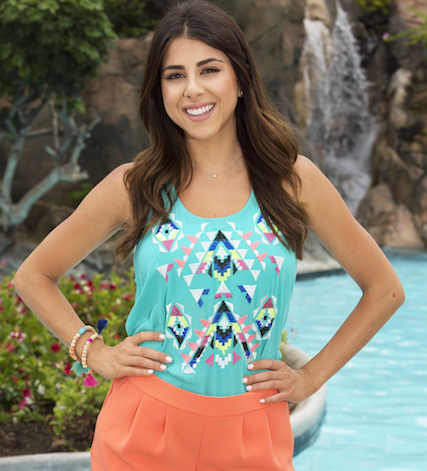 You might remember Daniella Monet as Trina Vega, the older sister of Tori Vega on Victorious, or recognize her from her upcoming stint on Freeform's Baby Daddy. Today, Daniella is bringing us a new show to keep us on our feet and laughing our heads off. Filmed in Hawaii, Paradise Run is a new reality TV competition from Nickelodeon where three teams of kids spend four weeks competing to win a special grand prize. We spoke with Daniella to learn some more about the new show she’s hosting.

GL: How did you get involved with Paradise Run?

Daniella: I just got very, very lucky. I've hosted events and things before, so we filmed the pilot in Palm Springs, and it just was so much fun to be a part of. And then we shot the rest of the show in Hawaii, which was awesome. It looks like paradise.

GL: It sounds like paradise. So how does the competition work?

Daniella: Throughout the show, the kids are competing in all sorts of crazy challenges. There are all sorts of different obstacles involving water slides and paddleboats. There's one cool challenge where they have to dig sand dollars out of the sand and use them to pay for different equipment to use in a water challenge. If they win an individual challenge, they get an advantage in the next one. Whoever finishes all the challenges fastest wins. And the grand prize, of course, is a tropical vacation.

GL: So is this like any competition show we’ve seen before?

Daniella: It's kind of like Amazing Race mixed with Wipe Out. It's also definitely reminiscent of the old-school Nickelodeon show, Legends of the Hidden Temple, which I loved to watch when I was younger.

GL: Definitely. What was your favorite challenge to film?

Daniella: There was one where I got to dress up as this crazy character. It was like I was going to a party and had to bring all this silly stuff with me, but I'd lost my accessories somewhere along the way. The teams have to swim in the pool and find my lei or my missing sandal or my hat and return it to me. It was so fun and crazy to film.

GL: What about Paradise Run are you most excited for the fans to see?

Daniella: I just want kids to get excited to want to be on the show. I think it’s one of those things you watch and say, “Oh my gosh, I wanna do that!” It’s just so adventurous and I think it will inspire kids to be more active in their own life, get outside and build their own challenges. Which I think is so cool. It's the kind of show that makes you want to get up, get out there and do it.

GL: If you were competing on Paradise Run, who would you pick to be your partner?

Daniella: Ooh good question! Probably my boyfriend Andrew. He’s pretty athletic, and as much as I would like to think of myself as being athletic I think that sometimes you need the advantage of someone who is taller and stronger. I think the trick to picking a partner is just someone who is sort of the opposite of you—someone who has the skills that you don't.

What do you think about Daniella’s new show Paradise Run? Who would you pick to be your competition partner? Don't forget to tune in for the premiere on Nickelodeon tonight at 7:00 p.m., and every weeknight for the rest of the month.