*Major* monkey business went down on the Legends set! 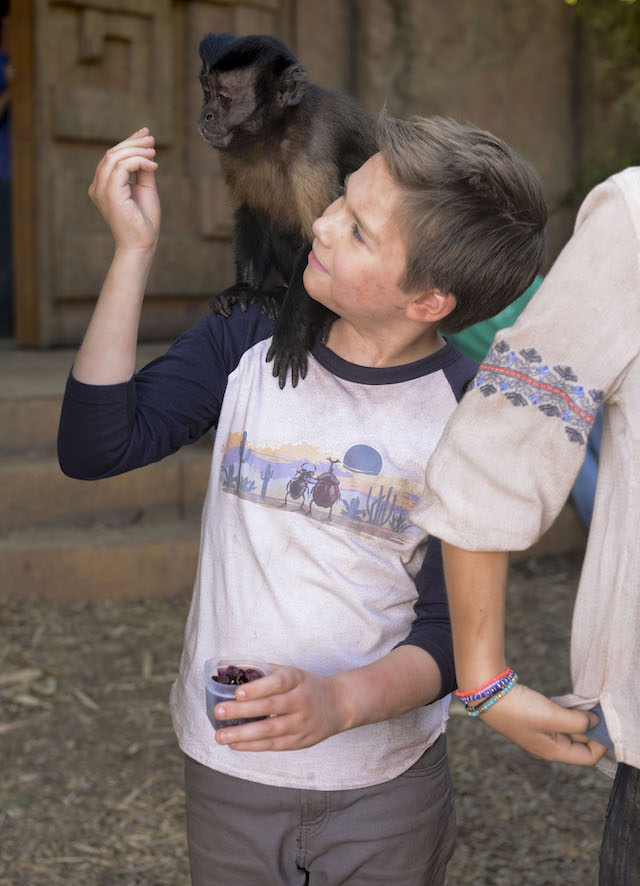 Can you believe that we're just over a week away from the premiere of Nickelodeon's Legends of the Hidden Temple!?

The movie that we've been waiting for for *months* is almost, sorta, finally here. We've already chatted with the movie's star, the delightful Isabela Moner for the cover of our December/January 2017 issue (on newsstands now!). Now we're talking to one of her on-screen sibs, Jet Jurgensmeyer, who plays Dudley in the flick, which hits screens Saturday, Nov. 26 at 8 p.m. (ET/PT).

Perhaps one of the most polite boys in the biz (he made sure to use *plenty* of "yes ma'ams" and "no ma'ams"), the Tennessee native shared tons of secrets from set during our convo—turns out that the stone temple isn't actually made from stone, and monkeys can have quite the attitude. Read on to find out more!

Girls' Life: What can you tell us about Legends? Give us a little overview.
Jet Jurgensmeyer: The movie’s about three siblings, me being one of them. I play Dudley. They get trapped in a temple and they have to go through mini obstacles to find their way out.

GL: Are all those obstacles similar to what they had on the original 90's TV show?
JJ: Yes ma’am, you got the moat, you got the the Shrine of the Silver Monkey—you have a bunch of things like that.

GL: Speaking of monkeys—I heard that your character can talk to animals.
JJ: Yes, ma’am, he can! He can speak monkey, mouse and millipede. He does not want to learn how to speak snake though because he doesn’t like snakes. I actually got to become friends with the monkey. Her name was Crystal and it was the monkey from Night at the Museum, Indiana Jones and all that stuff, so it was really cool. I had to train with her for a few days and she got to know me pretty well. I would get pretty excited when she came straight to me and when she jumped into my arms, that was like the highlight of the movie for me—that the monkey remembered me!

GL: If you got nothing else from Legends, you have a new monkey friend!
JJ: She lives about 20 minutes from me in California. I am super excited for that. I haven’t gone to see her yet but I am going to.

GL: So if you could have a conversation with one animal in real life, who would it be? Maybe Crystal?
JJ: Uh, definitely the monkey. I would like to figure out what the heck she’s saying, because she talks so much. There were a couple days she [seemed as if she] was like, “No, I am not working. Today is over,” and she was just not in a good mood.

GL: She sounds like a diva!
JJ: She was a little bit of a diva! She would go crazy. That’s when they would have to have the backup monkey ready and prepared in case she did have to go on.

GL: Speaking of stunts, did you get to do any fun ones for the movie?
JJ: We got to do a lot of running. I think if you added up all the time we ran, it would’ve been a marathon. Other than that, Isabela and me actually had to get in quick sand. We also got to swim over a moat on a raft. Those were mainly the stunts we got to do. If we had to do all the other stunts, we probably would’ve flipped because those were pretty scary.

GL: What else can you tell me about Dudley? Do you relate to him at all?
JJ: He’s the youngest child of three. There’s Sadie, there’s Noah and there’s Dudley. He’s trying to decide whose side he’s on: if he’s on Sadie’s side or Noah’s side. Sometimes Sadie makes good points and sometimes Noah makes good points.

GL: Was it scary filming any of the scenes in the movie? The trailer makes it all look a little freaky.
JJ: It wasn’t really scary, it was more exciting because all the animals except for the blue barracudas were real—the orange iguanas, the silver snakes, the green monkeys, jaguars… We were scared that the red jaguar would get loose, but that’s why the production was so secure. They would not let us in the same building with the jaguar. When the jaguar had to film—it's funny to say a jaguar had to film a movie—we were in a separate building doing school two floors up, so there was no way it could get to us.

GL: What's one behind-the-scenes secret that only the cast and crew know?
JJ: The entire temple is Styrofoam. These artists they hired for the movie carved the Styrofoam, it was unbelievable. They had like every little detail.

GL: You have another Nickelodeon remake coming up: Hey Arnold! the Jungle Movie. Can you tell us a little about that?
JJ: Yes ma’am! In Hey Arnold! the Jungle Movie I play Stinky, a kid from Arkansas that talks with a Southern accent—which wasn’t that much of a stretch for me because I’m from Nashville, Tenn. It’s a lot of fun because I love doing voiceover, I've been doing it since I was 5!

For more monkey business, be sure to check out Nickelodeon's Legends of the Hidden Temple when it premieres Saturday, Nov. 26, at 8 p.m. (ET/PT). This is one *legendary* event you do not want to miss!