Everything you need to know about JoJo Siwa

JoJo Siwa’s sleek platinum hairstyle is one of the most iconic ponys in pop culture. But while everyone’s busy debating the merits of her major mane, JoJo’s running her empire—and setting off on a sparkling spring headlining tour. 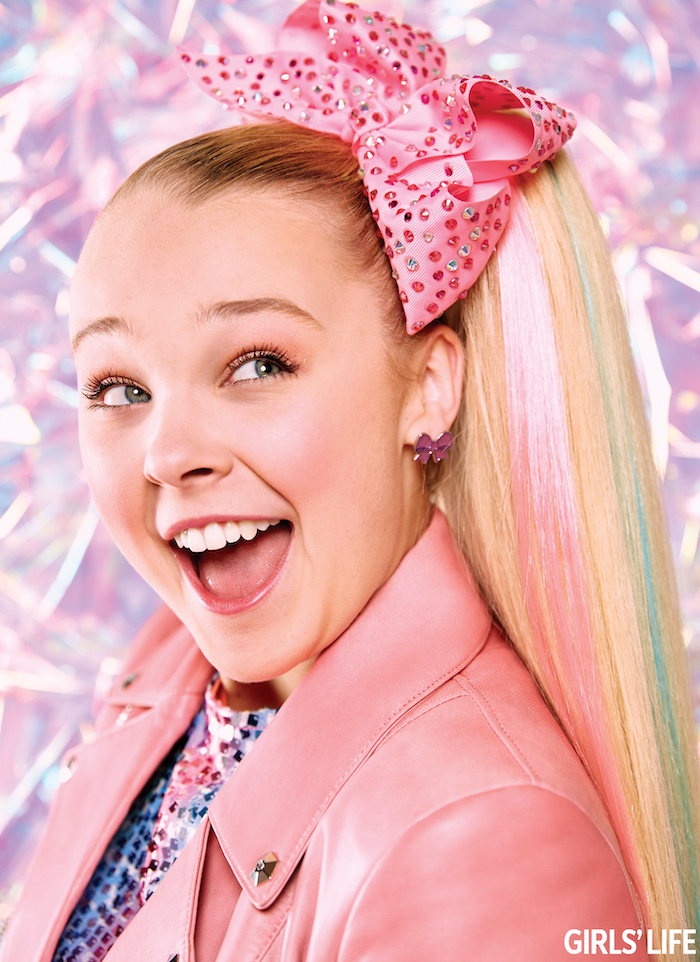 JoJo Siwa’s dog is not happy with her. BowBow, a Teacup Yorkie, has been barking at JoJo (short for Joelle Joanie) for a solid two minutes in an attempt to get her attention—so the singer-dancer-actress pauses to swiftly scoop up the tiny yapper and plop her onto her lap.

“I am so sorry,” she says, then pitches her voice up an octave, mostly addressing her furry friend, “I think she’s just jealous she’s not the one being interviewed.”

While BowBow might have a whopping 1.1 million followers on her own Instagram (check out @itsbowbowsiwa), JoJo and her platinum pony are what everyone’s really talking about. Her go-to sleek, side-swept, bow-embellished style are her very own signature.

“Who would have thought that a ponytail would be such a big part of my life?” the 15-year-old muses about her much-discussed ’do.

Starting Early
There’s no telling if JoJo’s mom had any indication of the power of a simple pony when she started styling 2-year-old JoJo’s hair with a bevy of bows. But without her trademark tresses, it’s probably safe to say JoJo wouldn’t be living the life she dreamed of as a kid back home in Omaha, watching Miley Stewart (aka Miley Cyrus) live a fabulous double life on Disney Channel.

In those days, “Just about every kid wanted to become famous like Hannah Montana, me included,” she remembers. But for her, it was different. Why? Well, mainly because JoJo actually made it happen (just minus the whole double persona thing).

It was in 2013—years after JoJo’s mom placed that first ribbon in her hair—that JoJo and her bows made their way into popular culture on Lifetime’s Abby’s Ultimate Dance Competition.

JoJo didn’t win the top spot on the show, but she did go on to star in two seasons of Dance Moms alongside Maddie and Mackenzie Ziegler, Kalani Hilliker and Nia Sioux. And, thanks to that perky pony and her bubbly personality, JoJo seriously stood out.

After leaving the show in 2016, she released her debut EP, D.R.E.A.M. The Music, last fall. Her videos for her hits—like “Boomerang” and “Hold the Drama”—have racked up more than 950 million views on YouTube. And while JoJo’s focusing more on music these days (she plays the piano and is learning how to play the drums, too), she certainly hasn’t left TV behind.

She shines as Nick Cannon’s sidekick on Nickelodeon’s Lip Sync Battle: Shorties and starred in the original Nickelodeon movie Blurt! as the know-it-all sister of Jace Norman’s character (where she sported not one but two bows fixed to a pair of space buns).

This spring, you’ll find her in two more specials on Nick—one for her 16th birthday and the other a behind-the-scenes look at her highly anticipated D.R.E.A.M. The Tour (which kicks off May 17 in Arizona and will hit 50-plus cities across the United States and Canada).

It’s her first-ever headlining gig. She’ll take BowBow with her on the road (duh) and, of course, she’ll be vlogging every moment to share the experience with her 9 million YouTube subscribers. “I’m so excited to see my fans and to perform my music live. It’s going to be amazing and epic. Every single show is going to be the best night of my life,” she gushes. “I have so many surprises in store for everyone—like, millions. So many sparkles, so much glitter! Rainbows, cupcakes, unicorns, all the things. Basically, this is my dream come true.” 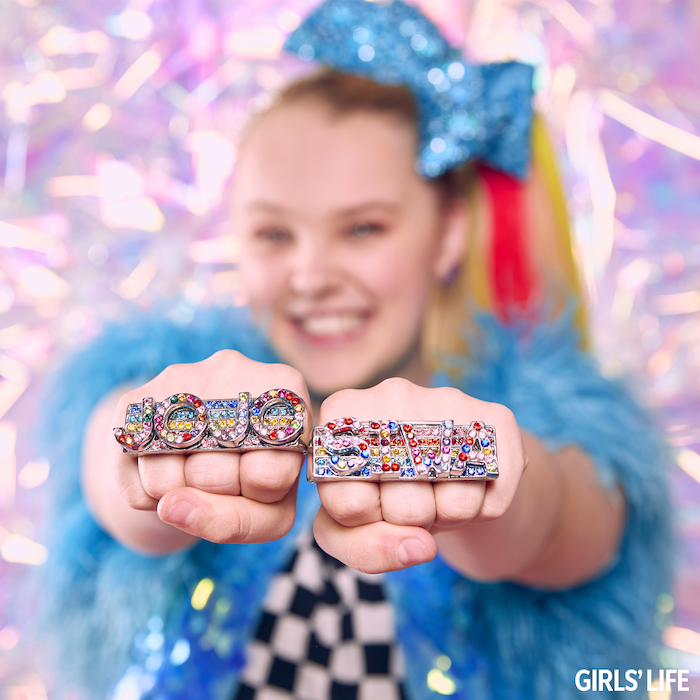 Big Bow, Big Bank
JoJo may be living her Hannah Montana dream—making music videos, going on tour and even hanging with Jimmy Fallon (The Tonight Show host challenged her to a hilarious “Aggressive Dance-Off”)—but bows aren’t just making JoJo famous: They are also a big business. In less than three years, JoJo has sold over 35 million bows—that’s literally a bow for every single one of her social media followers.

And it’s hardly just hair accessories. JoJo has created a consumer product powerhouse: Her rainbow-hued, glittery, sparkly goods range from toys to flavored water to electronics to crafts to clothing (yes, even underwear).

While sales numbers aren’t public, Payless has sold out of JoJo shoes every month since their debut last spring. Last summer, her JoJo doll outsold Barbie at Walmart. And now Target reports they can’t keep her newest JoJo’s Closet collection, released early this year, in stock.

While her coif has its critics, the simple fact is, all these years and ribbons later, JoJo still genuinely loves bows. And, to her and millions of others, they carry a real—and important—message: “Let’s say you’re at lunch at school and you have nowhere to sit...but then you see a kid wearing a JoJo bow. By wearing that bow, they’re saying, ‘You can sit with me. I will be your friend and I will love you and I will support you,’” she says of their symbolism.

"The fact that I can wake up every day and know that I am who I always wanted to be—that makes me incredibly happy. It might sound kind of cheesy, but I think it’s honestly what’s on the inside that makes you beautiful."

Blocking The Hate
While her message of kindness has earned JoJo millions of faithful fans (hi, Siwanators!), it’s also garnered her plenty of trolls who stack her social media comments with negativity. JoJo understands this is a downside of fame, but she still struggles to make sense of it all.

“The thing that makes me mad is when people hate on me for liking something popular, like the band Queen,” she says of the iconic group, whom she rocked out to during her entire GL cover shoot. “People get mad at me for that! I think that is absolutely bananas.” When JoJo posted her own piano rendition of “Bohemian Rhapsody” to Instagram, for example, trolls took to the comments to bash her for aspiring to cover the Brit four-piece’s famous tunes (as if there’s some set of rules that dictate who is allowed to love certain music).

While JoJo is known for her uber positive personality, she will clap back when bullied. In reaction to snarky responses on an Insta video of her singing a Queen song, she fired off a simple but pointed message: “Hi! I’m JoJo. I love Queen. I know most of you don’t like me, and that’s OK. I still love Queen. Nothing will change that.” By sticking up for herself, JoJo hopes to set an example for all Siwanators to stay true to themselves—and to tune out the hate on social media (and anywhere else).

“With every nasty comment, you’re going to get nice comments,” says JoJo, who admits that she blocks words like “hate,” “brat” and “ugly” from social media so she and her fans don’t see them. “Just focus on those 10 kind comments and don’t let that one hateful comment ruin your day.”

Stay Grounded
Despite the fame and success, JoJo swears she’s just a regular 15-year-old. She says she wants people to know that celebrities are just “normal humans that are walking on planet Earth.” 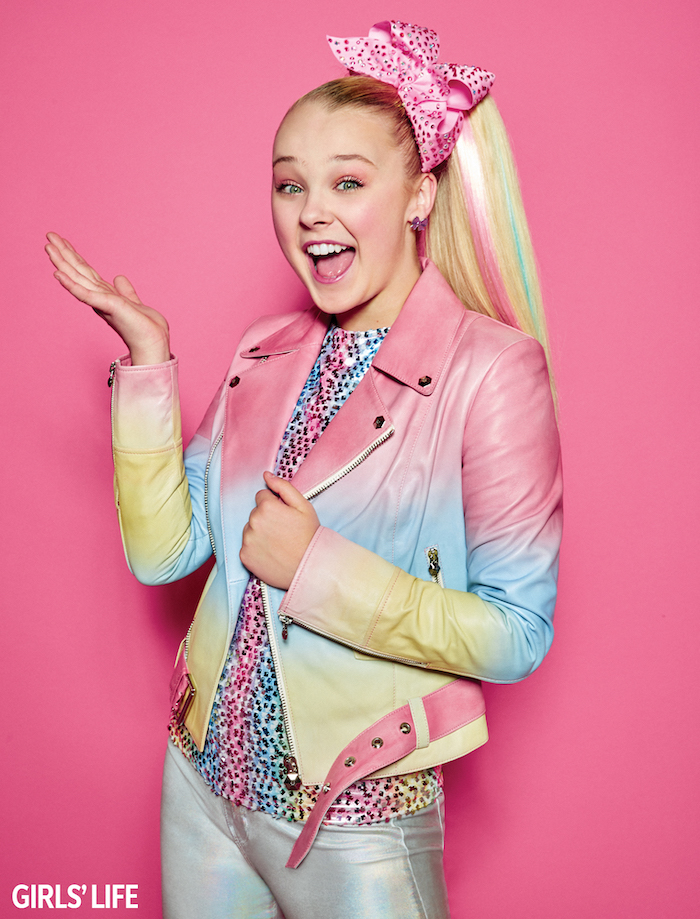 Hair and makeup by Diana Kazandjian. Styled by Arturo Chavez and Gary Wells.

“We still want to be asked, ‘How are you?’” she says. “We still want to talk to our friends.” And when it comes to besties, JoJo’s got some great ones in Colleen Ballinger (also known by her internet-famous alter-ego, Miranda Sings) and Colleen’s sister, Rachel Ballinger, who JoJo describes as the sisters she never had.

“I know that I can count on them for anything,” JoJo says. “Rachel was the first person I drove on a main road with, which was super scary. And Colleen gave me some amazing advice in relation to my tour. She told me not to be afraid to do what’s right for me or to go after what I want. It meant a lot to me.”

In whatever downtime JoJo may have in the near future, expect to find her mukbanging with the Ballingers on YouTube (seriously, if you’re not watching them chow down on The Cheesecake Factory together, are you even living?), snuggling with BowBow and hanging with her family. You know, being normal. And staying grounded, says JoJo, is key to her confidence—and her success.

This story originally appeared in the April/May 2019 issue of Girls' Life magazine.