Boy band In Real Life is releasing their *first* album! 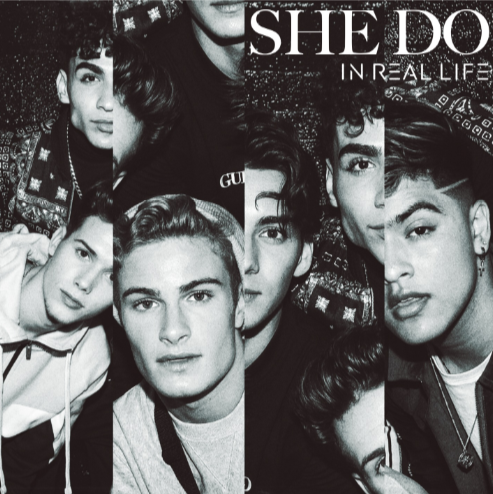 In Real Life has had a different start from most. Instead of forming in one of their garages after school, members Chance Perez, Sergio Calderon, Brady Tutton, Conor Smith and Drew Ramos met each other on TV. Specifically, on the 2017 ABC reality competition show Boy Band. After winning the show, they became hugely popular, releasing hits such as “Eyes Closed” and “Tattoo (How ‘Bout You)”.

Now, two years after they were brought together, IRL is dropping their *first* album: She Do. With a perfect blend of pop and R&B—as well as three never-before-heard songs—She Do is an album fans new and old are bound to heart. Girls’ Life’s Bailey Bujnosek chatted with the band about the making of She Do, the guys’ favorite music vid and what’s next for the band. Read on to hear what they had to say.

What was their favorite part of making She Do? SoCal native Chance said the process behind the song "Don’t Go" was the most memorable for him. “We didn’t originally think it was going to be on the album," he revealed exclusively to GL. "But it ended up being something that everybody loved, and we all contributed to it.” Fellow bandmate Sergio agreed, stating that “there was something we hadn’t seen of each other” that came through as they made that song.

As for what the album is all about, Conor, who’s experimented with everything from classical violin to hip hop, said the album represents “the growth and the journey that it took to get where we are” and credited the band’s amaze fan-base with helping them feel ready to make the album. Their song “Tattoo (How ‘Bout You)” has gotten over 22 million streams across all platforms thanks to the dedication of their fanbase, the so-called 'lifeliners'.

IRL has also gained *major* attention for their playful music videos, like the pool party featured in their recent summer-vibes song “Crazy AF”.

When asked which vid has been their fave to make, though, the guys singled out the yet-to-be-released video for “Don’t Go”. Chance explained that the video was an impromptu project. It started when bandmate Conor was singing the song on a bus ride to Orlando, and the group decided, “Alright, let’s film it!” Conor told us that it was “probably the most organic, exciting video [IRL] has created.” Lifeliners can keep an eye out for it on YouTube.

Brady, who grew up performing in choirs in Wisconsin, highlighted how his journey with the band over the past two years has helped him grow. “I’ve seen a lot of improvement in myself,” he said, “and I think I got comfortable with that being in a band...Like, [I am] able to get more comfortable on stage, and that’s possible because of the guys on stage that are making it easier.”

If you missed seeing IRL during last year’s Tonight Belongs To You tour, don’t despair! The band is hoping to hit the road again. Fans can look forward to hearing the new songs live “really soon,” according to Sergio, though he notes that they “don’t have any exact dates yet.”

You can stream She Do here now.

Are you excited to listen to IRL's new album? Let us know in the comments below!