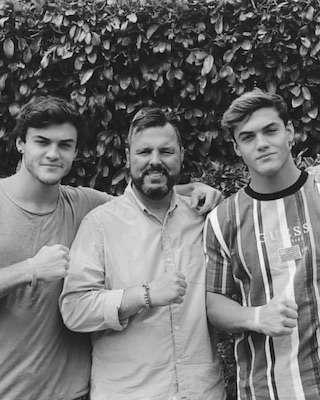 Losing a parent, or any loved one, is extremely difficult, and, unfortunately, Ethan and Grayson Dolan know the pain all too well. The Dolan Twins released their new documentary, "Losing a Best Friend," to celebrate the life of their late father, Sean, who lost his battle with cancer in early 2019.

"This very well may be the most important thing we will ever post on social media," the boys wrote along with the video, which features at-home movies from their childhood and more current interviews. "On January 19th, 2019, we lost our father to cancer. That was by far the most difficult day we’ve ever had to endure. We didn’t just lose our dad…we lost our best friend. While he was battling such a devastating disease, he never let it define him. Even while fighting something as terrifying as this, he still put the needs of everyone else before his own. He continued coaching. He continued helping students learn and grow. And he continued being the greatest dad and husband in the world. He was the most giving person we’ve ever known."

The twins also celebrated their father's memory by creating a charity named Love from Sean. The organization supports research, treatments and services for those affected by cancer and their families. Donations are made to various other organizations like the Cancer Hope Network.

Have you ever dealt with loss? Let us know your story in the comments if you'd like to share.