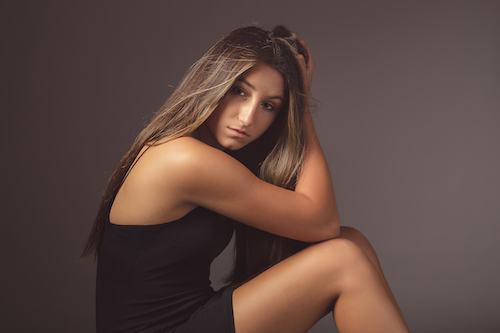 With music as a large part of her life since she could walk, singing and songwriting have helped Lana Chalfoun get through some of her lowest lows—turning her uncomfortable feelings into beautiful songs.

In 2018, Lana's hit single "Bring them Home" won the grand prize for the nationwide U.S. Conference of Catholic Bishops Campaign's contest Creating on the Margins. The following year Lana gained popularity with her album "Aware," which includes songs about the roller coaster ride of emotions that young love can put you through. Much of Lana's music is about the unspoken struggles and pressure that teenagers and young artists deal with.

This is especially true about her latest song "Be Ok" that dropped on October 23. "I wrote it at kind of a low point," Lana explained. "I was really stressed out about how I would further my career, and my head got filled with a lot of negative thoughts about not being able to succeed. So that got in the way of me pursuing anything. When I got on the piano, started crying and writing the song, that's where the inspiration came from."

Lana admitted that "writing the song was therapy for me, it turned my negative thoughts into something good that I created."

“BE OK” OUT NOW-LINK IN BIO available on all streaming platforms!

Lana got to film her first-ever music video for "Be Ok" on the famous streets of NYC. "Obviously COVID is going on so we didn't have a huge team or anything—because we had to follow the requirements for social distancing and everything—but it was really fun."

We loved talking to Lana about the funny moments she had with her team during the filming process. "During the bridge, my producer wanted to get shots of me screaming—obviously the noise wouldn't be in it—but it would look cool in the video and I couldn't do it in front of all those people so it took 20 minutes to get one good take of me screaming. I kept cracking up, and laughing on the floor."

Although Lana is a younger artist, her lyrics speak volumes about her maturity level. She's been compared to so many successful artists like Taylor Swift and Halsey.

Lana went on to tell us about what she hopes her fans and listeners will take away from her latest song "Be Ok." "I hope that people can listen to it and relate it to their own life in some way because I just think it's so cool how one song can apply to so many different people's lives and stories. If someone can genuinely feel something while listening to the song, that's the goal."

Through our conversations about the song "Be Ok," Lana gave us the inside scoop on how she landed on that title, and how it relates to the other songs she has coming out very soon such as "Get Mad" and "Cut Off." It wasn't easy. She renamed the song three times.

"At first the title was anxiety, then it changed again and then we finally settled for 'Be Ok,'" she said. "It's because 'Be Ok' is two words just like the other titles I have coming out, so we honestly thought it would look better."

Both "Get Mad" and "Cut Off" are major girl anthems and we cannot wait to hear them. "'Get Mad' is an empowering girl anthem after a bad break up, whereas 'Cut Off,' I wrote when I was pretty sad after a breakup and it was kind of coming to closure with what had happened," she said.

Lana also shared that "Get Mad" will be released in the next couple of weeks and "Cut Off" will follow that.

Lana said that when it came to "Be Ok," it only took her 45 minutes to write, because of the emotion behind the words.

"I had so much to say so the words just kind of flowed out of my brain," she confessed.

In talking about songwriting, Lana shared with us who her biggest role models are in the music industry, and one of the main ones is Adele. "I loved listening to her when I was younger and I did all of her songs at every single talent show."

Another one of her role models is Billie Eilish. "I just think her whole image is really cool. Obviously, she has an amazing voice, but her image and her brand are really influential," Lana told us. She also shared that if ever given the opportunity, Lana would pick Billie as her artist of choice to collaborate with. "I feel like our styles could go well together, and our writing would merge pretty well," Lana explained.

Singing is very near and dear to Lana's heart, but she told us she's also taken up acting. She has very *big* dreams and aspirations for her future regarding her acting career. "I would love to someday be in a Netflix show because I think that would be so fun to shoot and film."

Her advice for GL readers? "If you want to do something and you love something but are afraid of what someone might say, don't be because the excitement and joy that you get out of actually doing it will matter more than anything negative anybody has to say. It will make you much happier if you actually go after what you want."