EXCLUSIVE! Run the World talks friendship, new music and what it means to be "Beautiful" 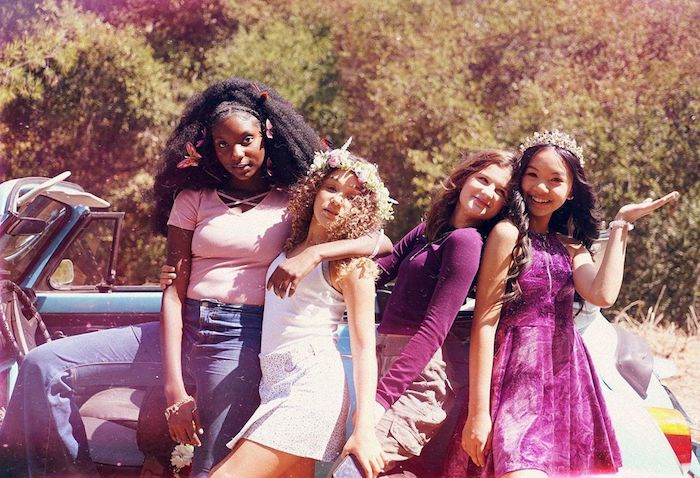 Who runs the world? Girls. Well, more specifically: The amazing girls of Run the World.

Jessalyn Grace, Corinne Joy, Hayley LeBlanc and Kheris Rogers are the star-powered tweens you *need* to get to know right now. Though their girl band started as a virtual passion project from Jam Jr., this quad squad has quickly transformed into an inseparable IRL friendship...and their music's only stayed strong(er). From the pump-you-up bop "Rainbow" to their soulful cover of Christina Aguilera's "Beautiful," these girls know how to create, motivate and inspire.

We caught up on Zoom with Jessalyn, Corinne, Hayley and Kheris to hear *all* about the "Beautiful" music vid, their first impressions of each other and what's up next for Run the World.

Girls' Life: Take us behind the scenes of "Beautiful."

Corinne: It was such a fun music video to shoot. We shot in this place with cabins, broken-down stairs everywhere...like this little village.
Jessalyn: I love my setup. It was this cool blue car and I'm just chilling there lip-syncing for the video. They put flowers all around me.
Hayley: Yes, I *loved* your setup! And Kheris's. Her hair looked amazing.
Kheris: It was so much fun seeing each other again. And, also, *so* hot. I was dying out there in the heat in the middle of nowhere!
Corinne: We were walking around exploring, and we saw this random RV van just out of nowhere.
Kheris: It looked like that van from Scooby-Doo.
Corinne: Hayley and I go in there, we open the door...
Hayley: ...and right up there on the shelf, there are these three Teletubby dolls and a Beatles poster! We're like, seriously what is happening.
Kheris: Hayley and Corinne walked in like it was nothing. Meanwhile I'm sitting back, like, I'll just watch but I am *not* going in there.

Girls' Life: What does "Beautiful" mean to you?

Kheris: I used to get bullied. I used to have no confidence in myself. Now, I feel like we have this whole platform to encourage everyone, hopefully around the whole world. We can let them know that it doesn't matter what people think of you, only that you love and believe in yourself. The song gives such an empowering message.
Corinne: Kheris said it all!

Girls' Life: What were your first impressions of each other?

Corinne: So I'd met Hayley before, and Jessalyn. But when I met Kheris, I'm first thinking—she's really tall.
Hayley: I was so intimidated by Kheris. I was honestly thinking she was going to be shy and then I met her and was like, oh my gosh, so much energy.
Jessalyn: She is super positive.
Kheris: Yeah, everyone says that! When I first met Corinne and Hayley it was at a sleepover and I felt like I was 30 feet tall compared to them.
Hayley: Probably the second time I met Jessalyn she just walked up to me and made this random hand signal! I was like...what are you doing, and she was like, "for funsies!" Now it's an inside joke and we're always doing it.
Jessalyn: Love it.
Kheris: The first time I met Jessalyn we were making a YouTube video and doing this gingerbread house competition. We see the other team's and Jessalyn's like, "I think they won," and I'm like, "You're on my team. No, they did not!"
Jessalyn: OMG, I remember that!

Girls' Life: How's your experience been as part of a girl group?

Corinne: Really fun. I didn't have as many friends before. As soon as Run the World was formed I feel like I have amazing friends now. We talk a lot and we're really close. Before we met, we were really shy to one another, but then we opened up and we all click really well.
Hayley: Corinne and Jessalyn and Kheris are such good dancers.
Corinne: We actually made the TikTok dance for our song "Diamond Hearts."
Jessalyn: I feel like we all pick up choreography pretty fast.
Hayley: Opposites attract. We all have different personalities, styles, aesthetics. But we come together and it works.
Kheris: Hayley made me the best aesthetic board on Pinterest.
Corinne: I feel like Kheris has such a glam aesthetic. For me, I feel like I have that basic aesthetic, like that girl who wears jeans every day. I like to skateboard a lot, so I guess I'm sort of a skater girl.
Jessalyn: My aesthetic is girly. My room is pink and gold with a little black in it. I like anything that's comfortable and trendy when it comes to fashion.
Corinne: So, Jessalyn's definitely a soft girl.
Hayley: She so is.
Kheris: She kind of reminds me of a VSCO girl.
Hayley: I like primary colors for some reason. I kind of just am drawn to them. My aesthetic is kind of weird stuff. I will literally pick out anything in my closet. Kheris can back me up on this.
Kheris: You're like an indie kid!
Corinne: So I think we have all four aesthetics. I'm skater girl, Kheris is glam girl, Jessalyn's a soft girl and Hayley's an indie girl.

Girls' Life: What's coming up on your new album?

Jessalyn: I'm so excited for our listeners and fans to hear these songs. We have five originals in the album along with covers and Christmas songs. It'll be so fun to get to listen to Christmas music all season long.
Kheris: Our album is definitely a vibe. We're talking about a lot of stuff that girls can connect to. It's super relatable.
Hayley: We have one cover on the album and it's one that Kheris and I really like. I'm not going to say it but I'm obsessed with it.
Corinne: I like that one too!

Girls' Life: Who are your role models?

Kheris: Oh gosh, everyone knows who I'm going to say. ZENDAYA.
Corinne: Yes, Zendaya!
Kheris: Lupita Nyong'o, Alicia Keys.
Hayley: Kheris...Corinne...Jessalyn...
Jessalyn: Wow, I'm a role model!
Hayley: But really, it's a cliché but my mom and my sister.
Jessalyn: My role model for the past few years is a girl group called Blackpink.
Kheris: She was going to say Blackpink.
Corinne: We all knew it.

Girls' Life: What advice do you have for other tween girls?

Corinne: Never give up on your dreams, you don't know where you can get unless you keep going. I never really thought I'd be in the place I am now, but I am because I didn't stop trying.
Kheris: You're going to get a million rejections but then you'll get that one "yes" that can change your life. Believe in yourself and look up to people in the world who are doing great things. That could be you one day.
Hayley: Be authentic. Everyone is different. People are going to love you for who you are and you don't have to change for anyone.
Jessalyn: I agree with Hayley. And try not to grow up too quickly. It's easy to see older teens on social media and want to be like them. But enjoy your childhood, it goes by fast!

Which Run the World girl do you *so* relate to? Let us know on social media @girlslifemag!

All images: Run the World/Instagram. Parts of this interview were edited for length and clarity.