3 questions for the Jonas Brothers 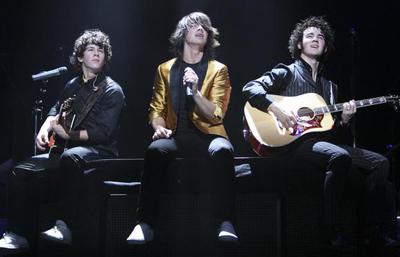 We asked one lucky GL Girl, Carlie from Chicago, to ask her three “I always wanted to know that” questions of her fave three guys!

Q:  WHAT IS YOUR FAVORITE SONG THAT YOU’VE WRITTEN?
NICK: “There are a couple songs on the new record that we’re really excited about. One of them is called ‘Love Bug,’ which is just a really great, quirky love song. It’s simple and it’s got some cool percussion instruments you don’t normally hear in our songs.”

Q:  WHAT IS YOUR FAVORITE SONG WRITTEN BY SOMEONE ELSE?
JOE: “There are so many songs I hear on the radio that make me go ‘Wow. That is such a great song. Wish I thought of that first!’  I think I’d like to have written any of the Beatles songs. Any of them.”

Q:  WHEN DID YOU FIRST REALIZE YOU WANTED TO BE IN A BAND TOGETHER?
KEVIN:  “In Camp Rock, camp is where we learned to play, where we learned our sound, and where we became a band. But the real Jonas Brothers. We kind of got into music like a staircase. It started with Nick, he went to Broadway to perform on stage in musicals, and then Joe went, too. I was doing commercials and acting. Then Nick got signed to a record label for a solo deal, but when the three of us wrote a song together, we all got signed!”