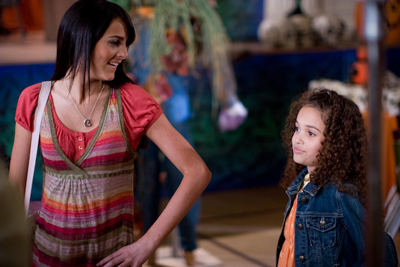 You might already know her as Lindsay’s little sis, but Ali Lohan is working hard this fall to make sure that’s not the only way people know her. Her new movie, Mostly Ghostly (with cutie Sterling Beaumon!) was released last week, and she’s got a slew of other projects, including a music deal and her reality TV show. So when GL caught up with Ali recently, we had plenty to chat about!

Filming Mostly Ghostly was…“Fun! My character, Traci, is the older girl in school. She’s popular and pretty and Max (Sterling’s character) likes her. She helps him out with his magic tricks. It was great to play a different character, and I got to try something different.”

Why scary movies aren’t her thing: “The movies like The Ring and stuff I watch, but then I can’t go to sleep. I’m like, ‘Mom!’ I saw Snakes on a Plane recently, and now I’m like, ‘Omigosh there are anacondas everywhere!’ I am petrified of snakes.”

Family Matters: “All of us are very grounded, normal people. The main point of the reality show (Living Lohan on E!) was to prove that we are normal, and we aren’t this crazy family. All of us keep each other grounded, and we just try to be as normal as possible.”

N.Y. > L.A.: “We live in Merrick (Long Island, NY) and all the people here are really cool. I hang out with friends in my town, and when Lindsay is in town I get my nails done with her, so it’s normal. If we were to go somewhere in L.A., the paparazzi would be there. But I love Merrick because it’s away from all that crazy stuff.”

So she and Cody never fight, right? Wrong! “Cody and I aren’t perfect. We fight a lot, but at the end of the day we are a close family. It’s normal to fight. It would be awkward not to!”

What’s her favorite holiday? “I love Thanksgiving and the food. I’m obsessed with my mom’s stuffing. After Thanksgiving, I’m still eating stuffing for ten weeks.”

Did You Know? “My mom was a former Rockette, so she shows me some dance moves. I’ve been dancing since I was younger, and I’m working with a choreographer right now on some things to prepare for when I go on tour. I’m actually in the process of signing to a record label. But I love dancing. It keeps me really occupied.”

What a sweetie, right? Check out Mostly Ghostly on DVD now, and look for Ali’s debut CD to hit music stores sometime early next year.