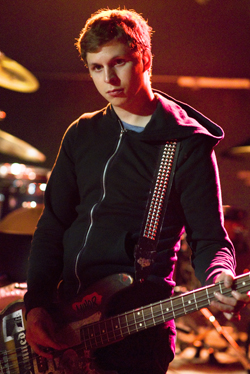 Michael Cera stars as "Nick" in Columbia Pictures and Mandate Pictures' comedy Nick & Norah's Infinite Playlist.
© 2007 Playlist LLC.  All rights reserved.
He has totally won me over with his baby face and awkward nerd character roles. Although he pretty much plays the same character in every movie, Canadian-born Michael Cera is one of my faves. He is so incredibly awkward that it makes him so incredibly adorable! Ah! He is always sporting the emo-indie-maybe-skater boy look with his hoodies and worn out kicks. Love it. And his curly hair? Totally a heart-melter.

I first saw him in the movie Juno, alongside the sweet button-face Ellen Paige, as Paulie Bleeker. He was so awkwardly cute in that movie with lines like "I try really hard, actually..." and "She smells like soup." I became obsessed and watched him again in Super Bad and a short online series called Clark and Michael. And now that his new movie, Nick and Norah's Infinite Playlist (book version was an addicting read), is out in theaters, I am super psyched to go watch it. I can't believe I haven't yet!

I did a little bit of info hunting online and found out that he's dating the cute, but semi-odd-ball comedian and actress, Charlyne Yi. And he is also in a band! I cannot wait until his next movie comes out.

I heart Michael Cera! How about you? Who’s your guy actor crush right now?