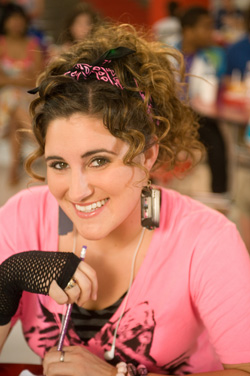 In anticipation of High School Musical 3, your pals here at GL decided that nothing gets us more pumped for the new movie (coming to theaters October 24) than a chat with one of its stars. So we talked to KayCee Stroh, the 24-year-old Utah native who plays Martha Cox, East High’s resident brainiac.


Three years ago, before the phenomenon of HSM began, KayCee was a recent high school graduate working full time as a dance teacher at her local dance school when she heard that Disney producers were auditioning for actors, dancers and extras in her area. KayCee persuaded some of her students to try out, but before she could blink twice, it was KayCee herself who was approached by director Kenny Ortega at the audition.

Now, three HSM movies later, KayCee has gone from a professional dancer to a professional actress. “I like that I get to show people that it can happen for you if you go for it and dedicate yourself, even if you are the girl from Utah who has big dreams,” she says. “Everyday I get to wake up and live my dream and dance, sing and act, and those are the three things that truthfully make me happy, and the fact that I get to do it for a living is incredible to me.”

In HSM 3, KayCee promises big changes ahead for Martha, who finally emerges from her shy girl shell by becoming (spoiler alert!) head cheerleader! “She really comes into her own and rules the school,” KayCee admits. “It’s a very good example that if you choose to come out and be yourself, how much you can grow as a person.”


So what is her favorite part about playing Martha? It must be the chance to work with some of Disney’s hottest young stars, right? 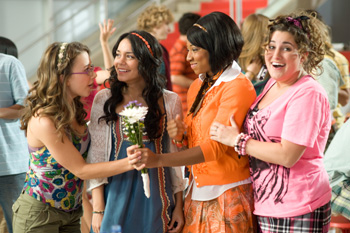 Nope. It is her position as a role model for girls. “I always have girls come up to me and say, ‘You inspired me to step out of my box,’ and it is so nice to inspire young girls out there to be healthy and active, but show them they don’t need to be a size zero to be beautiful or to be taken seriously with their talents,” she reveals. “I am blessed that me as KayCee gets to inspire people by being different, and Martha gets to show them what they can do and the success they can have.”

As for her fellow cast mates, after three movies together, they are tighter than ever. “It feels like a big family reunion every time we get back together,” she explains. “You know these people, you get each other’s personalities, you know how to joke with each other, and it makes it a lot of fun. We have a lot of late night parties!”
With all the mayhem surrounding HSM, it’s a wonder that KayCee has any free time on her hands. But she’s actually found the time to work on her music, collaborating with songwriters and recording a remake of “My Strongest Suit,” a song from the musical Aida. She’s also taking the time to focus on what she wants to do next in her acting career: a dramatic role. “I’m open and I’m reading through scripts, and who knows what will come next,” she says. “That is the beauty of my job.”

Love Martha as much as we do? Think KayCee does a fabulous job? Checking out HSM3 this weekend? Let us know.