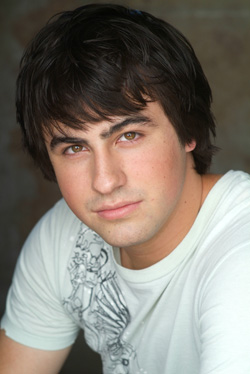 HSM 3 hits the big screen on Friday, so in honor of the big premiere we compiled 10 things you have to know about one of the movie’s stars, Utah native Ryne Sanborn. He plays basketball star Jason, and he gave us the scoop on sports, college plans and why he loves Tom Cruise.

1. The HSM cast and crew is like a family. “I missed everyone that I became close with during the first two movies, and it was harsh being away from them as long as we were. It was really like a reunion on the first day [of filming HSM3], and it felt so good to be back with everybody,” he tells us.

2. He doesn’t just play a jock in HSM, he is one! “I’ve always played baseball, since I was 3, and then I started playing hockey when I was 8,” he reveals. Plus, those intense HSM dance scenes prove that he’s got some smooth moves.

3. So what is Jason going to do when the HSM cast graduates from East High? “Jason is still struggling to keep up with everybody else. He’s stressed about finals throughout the whole movie. Everyone else is getting scholarships, but he’s just worried about graduating,” Ryne says.

4. Unlike Jason, Ryne’s got big plans for college and life after acting. “I want to be the kind of person who has a back side to him, and if acting doesn’t work out I want to be successful in other areas. I want to go school and get a degree in architecture,” he says. And with a 4.0 GPA, there’s no doubt that any school would be glad to have him!

5. Both Ryne and fellow HSM castmate KayCee Stroh are Utah natives, which is where all the HSM movies were filmed. So it’s no wonder he…

6. …snowboards. “We live in the valley, just a little bit outside downtown Salt Lake City, so I’m a half hour away from snowboarding. I’m a big snowboarder,” he explains. Baseball, hockey, dance and snowboarding? Talk about athletic.


7. Top Gun (starring Tom Cruise as Maverick) is his favorite movie. “One Halloween I bought an old bomber jacket from a vintage store and sewed a whole bunch of patches all over it, and I got tight jeans and cowboy boots and slicked my hair over, and I was Maverick,” he admits. 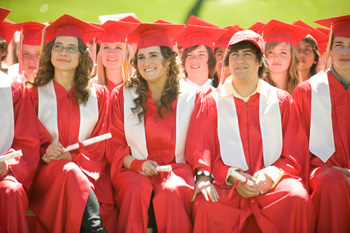 8. So is he going to trick-or-treat on Halloween? “For the longest time I did, but as I’ve gotten older I prefer playing tricks and pranks on people. Last year I sat on the front porch in a costume and scared people for a couple hours,” he jokes.

9. He collects sports memorabilia. “My dad and I have been Cubs fans forever. We have this little area in our house with a bunch of memorabilia that my parents have picked up over the years. We have anything you can think of with a Cubs logo on it,” he reveals. And how’d he get the name Ryne? Ryne Sandberg was a second baseman for the Chicago Cubs.

10. His perfect day wouldn’t be spent on a Hollywood movie set. “I’d wake up, grab some breakfast with a bunch of friends at Denny’s, and go have a great day of golf. Then towards the end of the day, I’d hit a movie or something with friends. A totally relaxed day just chilling with some friends,” he says. Sounds pretty good to us!