GL goes to Washington: What's the deal with Prop 8? 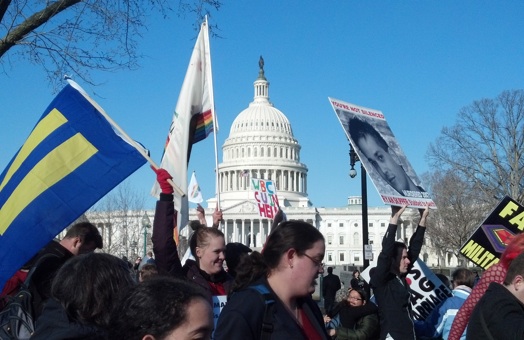 Yesterday, the Supreme Court heard oral arguments to determine the constitutionality of Proposition 8, or Prop 8, a California ban on same-sex marriage. Thousands of people gathered outside the Supreme Court to witness this generation’s civil rights debate. And I joined them to see history in the making.

By the time I arrived yesterday morning, going inside to hear the opening arguments was impossible. The line stretched to the end of the block. For days eager supporters have set up camp outside the courthouse, complete with makeshift sleeping bags and coffee carafes to recharge. Thankfully I didn’t have to go inside to enjoy the revelry outside.

The scene on Capitol Hill was vibrant. And I mean that in every sense of the word: the heartfelt singing and chanting, the powerful signs, the colorful flags—nothing at the gathering was short of energetic and inspiring. Hundreds of supporters jam-packed onto narrow sidewalk in front of the courthouse and overflowed onto the street. Opponents of same-sex marriage were there, but were greatly outnumbered by supporters with “No H8” signs. 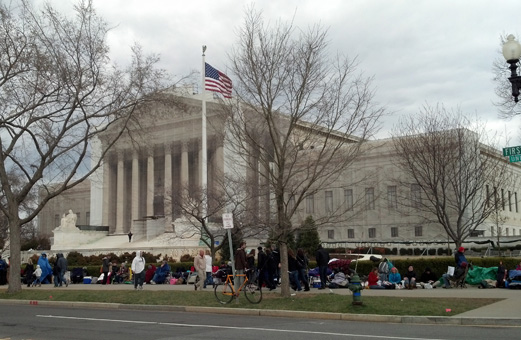 So, what’s the big fuss? Prop 8 has been a contentious and continuous debate in California for years. In 2008 the California Supreme Court legalized same-sex marriage, only to be banned by voters with Prop 8. After being turned over by lower district courts, it’s now being settled in the highest court of the land.

Same-sex marriage opponents claim that allowing gay couples to marry destroys the sanctity of marriage. How can the government tarnish tradition, they argue. To them, families should uphold the father-mother household illustrated in the Bible. Their biggest concern, should same-sex marriage become legal, is that if a church turns down wedding a same-sex couple, will they lose their tax-exempt status for not upholding the law?

To the other side, denying these privileges is discrimination, plain and simple. The 14th Amendment guarantees equal rights for all. Shouldn’t that apply to a committed couple in love, regardless of their sexual orientation? Same-sex marriage supporters point out that if Catholic churches can turn away a hetero Mormon or Jewish couple without legal repercussions, so can they turn away a homosexual couple.

So far, President Obama and over half of the country favor same-sex marriage. How this will affect the outcome of the ruling is uncertain. We won’t find out the justices’ decision until July.

How do you think the Supreme Court should rule on Prop 8 and DOMA? And remember: Girls’ Life is welcoming of all views, so please be respectful to your fellow commenters.

POSTED IN sexuality, I think I'm gay, my best friend is gay, bisexuality, transgender, transsexual, In the News, 2012 election issues