Feel Good Friday: This chick is a hit on the football field! 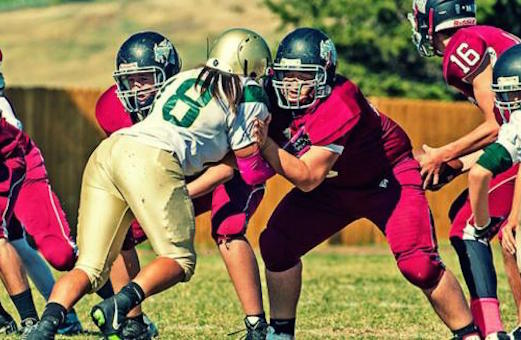 Step aside Bella and the Bulldogs, there’s a new football female in town.

Can you imagine being the only girl on a football team and having to compete against all boys—as a linebacker? That’s exactly what this Colorado teen has been doing for the past 11 years.

Meet Haley Abeyta, your typical sophomore girl—except for the fact that she rocks it on the football field as the only female linebacker on a team of otherwise all boys.

This chick isn’t just known for being the only girl on her team, though. She’s also a super fierce competitor, and was even awarded "Outstanding Sophomore Linebacker" at University of Oregon's collegiate football camp last summer. She even got to hang and take a pic with NFL quarterback Marcus Mariota, who won the Heisman trophy!

Haley’s coach, Zack Morris, said, "She's tough and gets after it. We had a summer camp and some of the players were counting in the line and positioning themselves so they didn't have to go against her in drills."

Sure, Haley has faced some critics for being a girl on the field, but she doesn’t let it stop her, especially now that she's competing for a spot on her school's varsity team and starting line. Even better, she's hoping to continue kicking butt and wants to play football in college, too.

And to that we say: anything boys can do, girls can do better, right? You go, girl!

Do you know any girls who play on a team with guys? Share in the comments below.

POSTED IN LIFE, In the News, Feel Good Friday