Crucial update: Same-sex marriage is now legal in all 50 states 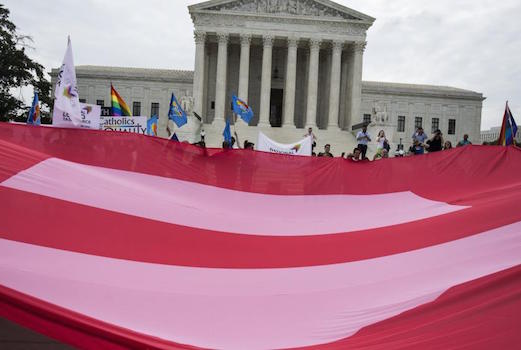 This morning, the Supreme Court ruled that all 50 states must recognize and legalize same-sex marriage. Before today, only 36 states (and D.C.) allowed all couples to marry regardless of their genders.

It was a close call, with five of the nine justices in favor of the ruling and four against. And, notably, while the court did have the option to only require states to give same-sex couples the same rights as straight married couples (like the ability to make big life and health decisions for a partner who is incapable) without actually calling it marriage, the court ruled in favor of full equality—a big win for the LGBTQIA community and supporters. Much of the nation agrees with the ruling, with 57% of Americans saying they support marriage equality.

What do you think about this history-making news? Let us know in the comments below.

POSTED IN sexuality, I think I'm gay, my best friend is gay, bisexuality, transgender, transsexual, I don't feel right in my own skin, In the News