Feel Good Friday: This pig and dog are unlikely BFFs 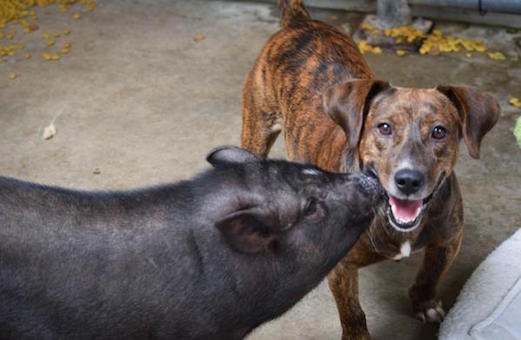 You probably don’t know what you would do without that one bestie you’ve basically known since birth.
The same is true for Jack, the three-year-old dachshund/beagle mix, and Tuna, the 5-month-old potbellied pig, who were abandoned by their owner and dropped at the Humane Society of North Texas last month. Tuna, who has lived with Jack her whole life, is super attached to him and even gives him piggy kisses! And of course, Jack loves her too.

When the duo arrived at the shelter, the staff faced a bit of a predicament. They’d never seen such an unusual pair before, and there was no way these two could be separated. Since not all the other dogs were comfortable around pigs, Jack and Tuna lived in the exotic animal area of the shelter. Then, the Humane Society set about looking for a home that would take both critters.

Happily, after the story was covered by news outlets like the Huffington Post this week, Jack and Tuna were adopted by a super sweet couple.  Now, their cute and quirky family is complete!

What do you think about these unusual besties?