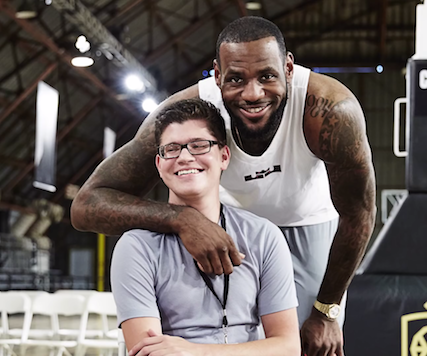 Textbooks? Check. Homework? Check. Collaboration with one of the world’s most popular shoe companies? Check. Matthew Walzer is just your typical nineteen year old college student…except for the fact that he helped design one of the most innovative, helpful and stylish new shoes in Nike's collection.

It all started back in 2012 when Walzer decided that, like any normal teen, he wanted a little bit of independence. But Walzer wasn't thinking about a car or a later curfew like a lot of high school students—he wanted easily accessible shoes.

In 1995, Walzer was born with underdeveloped lungs, which caused him to develop cerebral palsy, a disorder that affects his muscle control (though it can affect others mentally as well). One of the most common tasks Walzer struggles with? Putting on his shoes. Because of stiffness in his hand’s muscles as a result of his condition, Walzer only has flexibility in one of his hands, making it almost impossible to tie his shoes by himself.

When Walzer realized he wanted to have a real college experience and didn’t want to drag his parents to school with him so they could tie his shoes (or ask anyone else to do it for him), he took matters into his own hands and wrote a letter to Nike CEO Mark Parker, asking him for help—and offering help of his own.

For three years, Walzer and Nike worked together to create the perfect stylish and accessible shoe for people whose physical abilities are limited. Today.com reports that Walzer even came up with the zipper design that allows him to put on the shoe, fasten it and take it off all with just one hand. Now, the shoe, part of LeBron James's line called the Nike Zoom Solider 8 FLYEASE, is finally complete and on sale to the general public.

“To be able to give input on the design of such an impactful and innovative shoe was an amazing experience," Walzer said. "To know that I contributed to a shoe that is going to change so many lives makes me feel so proud."

As for the moment Walzer put on the first prototype of the shoe? "It was the first time ever that I was able to put my own shoes on,” said Walzer. “I remember breaking down crying."

Congratulations to Matthew Walzer and Nike for creating such an innovative and helpful product—we know it's going to help so many people.

Have you ever wanted to collaborate with a big company on a product? What ideas do you have to make the world a more accessible place?

POSTED IN disabilities, sneakers, In the News, Feel Good Friday