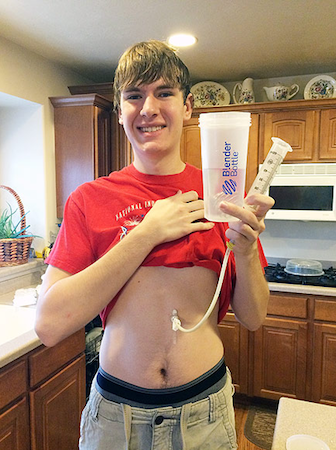 Imagine if every time you ate a piece of pizza or took a bite of your mom’s famous chocolate chip cookies, you had to suffer constant stomachaches, muscle and bone pain, hives, headaches and unbearable nausea. This sadly is the reality for nineteen-year-old Alex Visker.

The Utah teen is allergic to all food and, for the past four years, hasn’t been able to eat anything solid. Instead, he has a feeding tube that is inserted into his stomach and provides him nutrients with a special high-calorie mix.

Beginning as a toddler, Alex would get very sick after eating meals. He visited many doctors who were baffled by his condition. Some thought it was anxiety and others concluded it was just constipation. Finally, one doctor realized that he was allergic to the proteins in food.

Despite his tough battle with his allergy, Alex has remained upbeat. "Everything in our society revolves around food, but I've learned to live with it. I remember what it tastes like. And that will have to be enough," he told People. He even cooks for his friends because as he said, “I don’t want anyone to feel bad about eating in front of me.” Though resisting the urge to eat something delicious has gotta be tough, Alex has overcome it—and even graduated high school after missing 300 days of school because of his illness.

Madison Abbot, a local mom who arranged a benefit concerts for Alex, said, “He's an inspiration. He hasn't lost hope that there's a way for him to feel better. His doesn't let his illness bring him down, which is a lesson we could all learn.”

Sticking to a healthy diet is healthy enough for most kids, so we can't even imagine how hard life can be some days for Alex, but luckily his friends and community have been there for him every step of the way. They've even started a GoFundMe page where friends and strangers alike can help Alex and his family pay for the medical bills insurance doesn't cover.

Can you imagine having to live without eating real food? What can you not imagine ever having to give up?

OMG, we just found the most
adorbs accessories 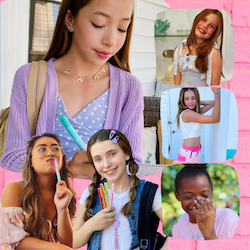 Glow up your fall fashion ASAP with sweet jewelry from Calico Sun. We got *all* the deets from our savvy style squad right HERE.