This sweet new bra might be able to detect cancer 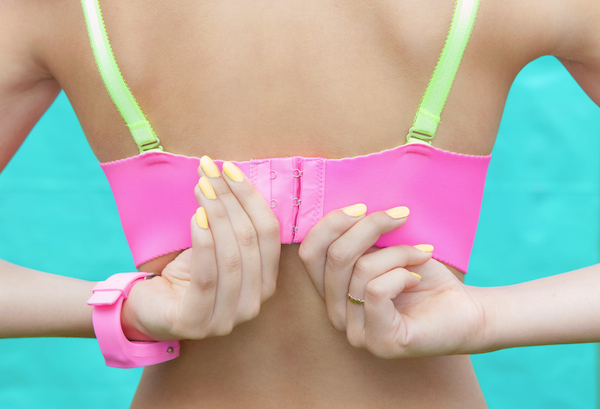 "Infrared bra"? Sounds scary, but it's actually super cool—and it might just save your life.

According to The Telegraph, scientists at a Colombian university have been working hard on developing a brand new bra, one that can be used to detect signs of breast cancer. Using small infrared sensors that measure body temperature, the bra will be able to detect when part of the wearer's breast differs in degree from the rest. Why that helps? Irregular or cancerous cells are hotter than the rest of your body—and the bra can basically pinpoint where these areas are, if they exist.

If the bra detects an abnormal body temperature, it can let the wearer know so they can get properly checked out by a doc, and even treated if need be. And it doesn't have to be something you wear every day, either. Pop it on every now and then even just for a few minutes to examine yourself. A three light system lets you know the results: green for all good, yellow to test again and red for irregularities. The bra can even record the temperatures of your readings so you can bring it to your doctor's appointment with you.

While researchers are hopeful the wearable tech can help women all over, they want to make sure users know the bra isn't meant to replace regular doctor's visits or other regular breast exams. "We don't want to replace a doctor's job," explains reseracher Maria Jaramillo. "The idea is to develop a technique that will help with early detection."

The bra is still being tested, so you can't rush out to the store and buy your own just yet, but the creators are assuring future customers that tehy're planning on keeping it wallet-friendly.

What do you think about this new bra? Would you give it a shot?