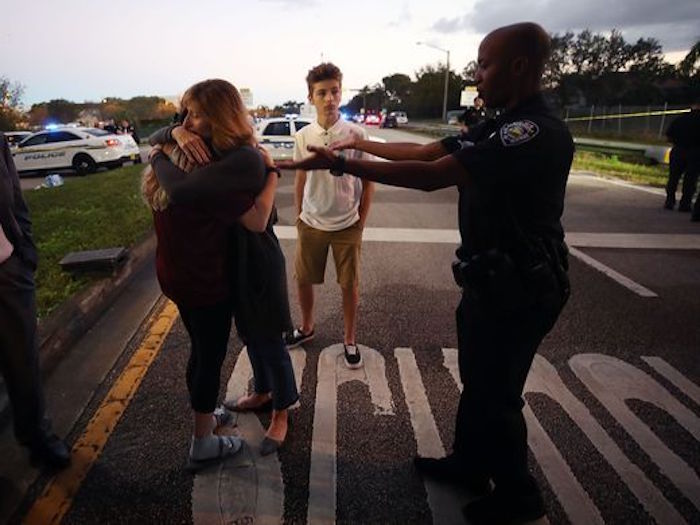 The links within this post lead to news articles of recent events and may contain images that are graphic and/or disturbing. Please be cautious when visiting these links.

Yesterday, a 19-year-old gunman opened fire at Marjory Stoneman Douglas High School in Parkland, Florida. At the time of publication, there are 17 dead and 14 wounded – five of which have life-threatening injuries.

The main suspect is Nikolas Cruz, a former student who had been expelled for disciplinary reasons. He was arrested an hour after the tragic occurrence and is now in police custody. The gunman had an AR-15 style semi-automatic rifle, with many rounds of ammunition, according to NBC News.

President Donald Trump in a press conference today at 11 a.m. said, "Each person who was stolen from us yesterday, had a full life ahead of them, a life filled with wonderous beauty and unlimited potential and promise. Each one had dreams to pursue, love to give and talents to share with the world." He emphasized his condolences to those who lost a loved one.

Before the press conference Trump tweeted:

My prayers and condolences to the families of the victims of the terrible Florida shooting. No child, teacher or anyone else should ever feel unsafe in an American school.

This is now on the list of the top 10 deadliest shootings in modern United States history. Many of the victims were high school students.

Footage of the shooting was captured by students sending Snapchats from the scene. The videos show the experience of those who were in the building at the time of the shooting.

This was an absolutely horrifying and confusing event in American history. And now with increasing media coverage, it may be difficult to avoid disturbing visuals. This shooting has reignited a national discussion around gun control, and the debate will likely continue for some time.

Below, we've put together a few suggestions on healthy ways to process information during this difficult time...

Pick your news organizations with care:
With so much confusion and uneasiness, some websites may give misleading or false, sensationalized or unnecessarily disturbing information about the shooting. If you want more information, choose a news website you can trust or has high ethical standards. Some with good reputations are: AP, CNN, The Wall Street Journal, Fox, The New York Times and The Washington Post.

Talk to your parents:
Your parents are there for you when you need them. If you're feeling upset, scared or confused, ask them to explain some aspects to you. Reading the news on your own can lead you down a wormhole of information, so always ask for clarification when you need it.

Shut it down:
Sometimes you just need to get away from your phone. Log off your social media accounts and turn off the TV. It's important to let your brain soak in and process the information you've received. Similarly, when people are emotional, they are more likely to say things they don't mean or lash out on social media. The last thing you want is to find yourself in a fight over a Facebook post.

Do something positive:
It's easy to feel helpless when something like this occurs. Everything feels so far out of your control. Try starting a small fundraiser for the families of the victims, a campaign for gun control or a social media movement about getting help for those with mental health problems. However, keep in mind tweeting #ThoughtsandPrayers only goes so far. Stay positive and try to make something good come out of this.

by Alyson Trager, with additional reporting from Hayley Anderson | 2/15/2018