Ruth Bader Ginsburg, a Supreme Court Justice with a 27-year tenure and strong advocate for women's rights, died at 87 in Washington D.C. on Sept. 18 due to complications resulting from her battle with pancreatic cancer.

Ginsburg was nominated to the Supreme Court in 1993 by former President Bill Clinton, becoming only the second woman to ever take a seat in the nation's highest court. She founded the ACLU's Women's Rights Project, becoming a champion for gender equity both in and out of her position as a Justice.

"A system of justice will be the richer for diversity of background & experience.”

On this day in 1993 Ruth Bader Ginsburg took her judicial oath as the 1st Jewish woman & the second woman justice ever appointed to the Supreme Court.

Thank you RBG for fighting all these years. pic.twitter.com/XQhQ7Olgzg

Known for her perpetual fighter attitude when it came to her health, Ginsburg battled cancer for two decades—undergoing surgery for colon cancer in 1999 and tackling pancreatic cancer since around 2009. She was persistent, though, telling the nation in a July statement that, "I have often said I would remain a member of the Court as long as I can do the job full steam. I remain fully able to do that."

Her legacy is irreplaceable, and she isn't ready to have someone else take over just yet.

“My most fervent wish is that I will not be replaced until a new President is installed," Ginsburg said in a statement written to her granddaughter Clara Spera in the days before her passing, according to NPR.

Though she is gone, her proven fight for equity does not stop here. Rest in peace, Ruth Bader Ginsburg. 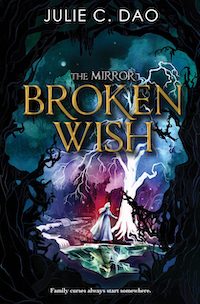 A curse follows a family over generations. Disney Publishing, $19
[Enter to win here!]