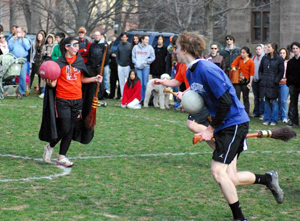 Disappointed when you didn’t receive your Hogwarts letter when you were eleven? Well, don’t give up hope yet. Turns out, there is a way for us mere muggles to immerse ourselves in the world of Harry Potter, and it’s happening this weekend in the Big Apple!   We’re talking, of course, about the Fourth Annual Quidditch World Cup. On Nov. 13 and 14, over 60 teams from universities and high schools across Canada and the US (including the likes of Harvard, Yale, and MIT) will converge in New York City to battle it out for the title of champion.   For all you Potter-savvy readers out there, you of course know that Quidditch is the wizard sport played in the sky on broomsticks with no less than four balls including the quaffle, two bludgers and a golden snitch.

The muggle version, however, is a little more realistic, but has the same basic rules. The players must straddle brooms the entire time, but run up and down the field instead of fly, and cross country players dressed in all yellow take the place of snitches. At the start of the match, the “snitch” is let loose to run all around the school’s campus while it is chased by the two seekers who try to catch him or her.    No doubt, the World Cup was scheduled to coincide with the release of Harry Potter and the Deathly Hallows: Part 1. It’s certainly got us shivering with anticipation, anyway.

Would you ever play in a Quidditch match? Blog about it, Potterheads.