Now that Turkey Day has passed, we're officially allowed to start gearing up for the holiday season! And Jackie Evancho (the 10-year-old singing prodigy from last season’s America's Got Talent) has got just the thing to get ya in the festive mood.
O Holy Night, Evancho's new album, features some of the most-loved Christmas carol classics such as the title track and "Silent Night". She also showcases her amazing talent through opera pieces including "Panis Angelicus" and "Pie Jesu". Though the singing sensation may be young, her signature soprano vocals give each track a mature and authentic feel. The album is the perfect soundtrack to trimming the tree, baking gingerbread men, or curling up in front of a crackling fire with the fam. 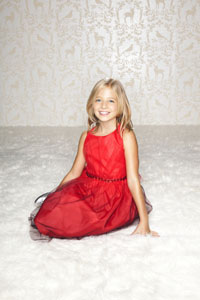 The CD also comes in a combo pack, which features a bonus DVD. See behind-the-scenes footage of Jackie, including an exclusive interview filmed after the finale of America's Got Talent. Also re-live her incredible performances from the show and watch the audition tape that landed her on the quest for her big break.  With O Holy Night (out now), Jackie shows the world that she may be little, but she has BIG talent.
Were you rooting for Jackie on America’s Got Talent? Blog about it, babes.