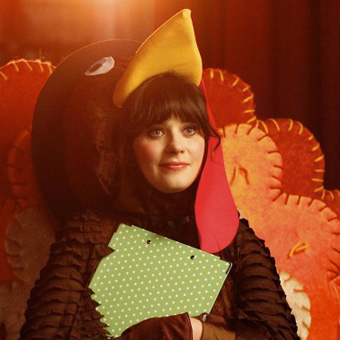 April isn’t just known for spring showers, it’s also known as National Humor Month. OK, so not that many people actually know that, but we are honoring it nonetheless.

And what better way to acknowledge and celebrate this month than by thinking of our fave comedy actors? Check out this list to LOL along with our picks.

The whole cast on this show is hilarious, but the comedic chemistry and relationship between these two actors are perfect! Melissa and Joey fit their roles to a T and easily bounce off each other. Their comedic banter? Amazing.

Doug Brochu from So Random!

No matter which skit Doug is in on So Random, he plays it with all his heart…and humor. Doug has the knack for making people laugh just with a certain look in his eye or making a crazy face. When an actor doesn’t even need to use words to be funny, that’s when you know they’re the real deal.

With her big eyes, sweet smile and adorable personality, Zooey brings her awkwardness and likeability everywhere she goes. All she has to do is be herself and, well, cue the laughter. Yep, Zooey’s a natural comedian.

With this show being so crazy, obviously Disney had to do a good job of casting the lead actress. And they definitely did. Bridgit plays an average girl with a zany family, and she brings all the humor from real life and multiplies it by twenty in the show. Anything that would be simply funny in the real world is hilarious when Bridgit portrays it in her show.

He got his Nickelodeon start as Crazy Steve on Drake & Josh, and now he plays Spencer on iCarly. One thing hasn’t changed, though: This guy has perfect comedic timing. Jerry isn’t afraid to be strange and crazy and make weird faces. He does whatever he has to in order to get laughs. We say it works very well!

The MTV show that Dylan currently stars in may be more of a drama than comedy, but that doesn’t stop him from bringing his own easygoing humor to it. He plays Stiles, the main character’s best friend, and he always lightens the heavy mood on the show using his snarky, sarcastic and very funny comments.

Who’s your favorite comedian at the moment? Blog about it, babes.
Love this post? You'll heart these, too!