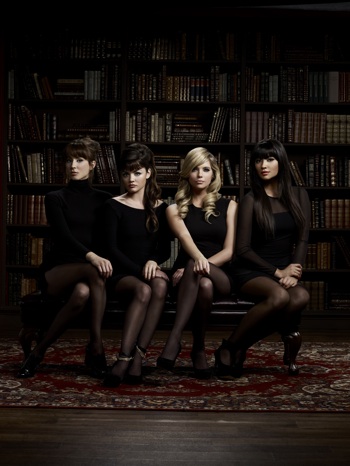 After a shocking season finale, we’re anxiously awaiting the return of Pretty Little Liars tonight, June 10, at 8 p.m. ET/PT on ABC Family. This season is going to be a must-watch with tons of surprising plot twists and questions that will finally be answered. Let’s just say we’re crossing our fingers that this season is the one where we (finally) find out who the real A is. In honor of the upcoming season, we decided to dish out our top 10 most shocking moments of season 4…and what we hope will finally happen in season 5.

The season four finale was one of the most eventful episodes yet, but the most shocking moment of all was definitely when Ezra was shot. We knew something was bound to happen to him but we had no clue it would be this! We are itching to find out if he is alive or not!

We’ve all been suspecting that Allison was alive since season 1, but to see her alive and in the present was still a little bit strange. Having her come “back from the dead” added a whole other level of confusion to the show. Thankfully we finally discovered what really happened that night during the season 4 finale.

After all the trouble he caused, we never expected Wilden to die off so suddenly. “A” obviously needed him gone and found a way to do it. We know we should be used to it by now, but we are still shocked every time a character turns up dead.

Once we got over the initial shock of Wilden’s murder we never thought we would see the day when Hanna’s mom would be tried for murder! Ms. Marin was never on our radar and then all of sudden she was thrown in jail. It made us realize that anything is possible.

We were stunned when one half of our fave couple appeared to be the one and only “A”. There were tons of clues and hints that pointed towards Ezra but we’re holding out hope that something more has yet to be revealed.

We know “A” will do anything to get her way but we were shocked when a car drove through Emily’s house into the living room. Thankfully no one was hurt but—whoo!—didn’t see that one coming.

It was the breakup heard around the nation. We were sure that this couple could have made it through anything. But maybe Caleb’s return this season we will allow Haleb to see the light of day once again.

We were more than shocked when Spencer became addicted to pills that apparently helped her focus while studying. Out of all the girls, who would’ve thought Spencer would be up to no good?

Ezra has caused more problems than solutions this past season but we were still happy that Aria chose Ezra over Jake. The possibility of Aria being with someone other than Ezra really was no option in our mind. Thought it was nice to have a new cutie on the scene for a few episodes.

When the truth behind the night Alli went missing was finally revealed, we were freaking out! All of the pieces finally came together and we were able to see how Mona and Alli’s parents were involved. Finally, we got some much-needed answers.

This past season was super intense and we are only expecting the new season to be even crazier. Here are some things that we are hoping to see in season 5…

• Finding out Ezra is, in fact, alive

• The real “A” finally reveals herself/himself

• The girls (finally!) make it to college

What are you hoping for in the upcoming season? Are you tuning in to tonight’s Pretty Little Liars premiere? Share in the comments below.