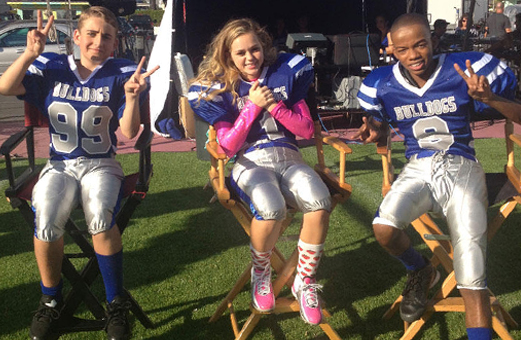 We’ve got football fever, and it’s not just because we’re sneaking up on Superbowl season. Bella’s to blame—Bella and the Bulldogs, actually. Premiering on Nickelodeon on Saturday, January 17, the show stars newcomer Brec Bassinger as bubbly cheerleader Bella, who decides to switch from her cheer squad to the other side—as in, the boys’ football team!

We heart Bella and her killer confidence as the Bulldog’s new quarterback, but the switch takes some by surprise—like her cheerleader BFF Sophie and her mom, Carrie (who can’t tell a tackle from a touchdown).

Another twist in the game? The team (and especially former QB, Troy) aren’t exactly thrilled to have a rookie joining their ranks—and they’re determined to show Bella just how hard she’ll have to work to hang with the boys.

Brec shines as Bella, showing she’s a force to be reckoned with on and off the field. IRL, she’s a hilarious, fun-loving Texas native with big dreams. When she’s not acting or hanging out with her co-stars (like the insanely adorable Coy Stewart, featured in GL’s December/January 2015 issue), Brec’s snapping selfies, shopping and dreaming up sketch comedy skits.

We can’t wait to see what this kick-off season has in store for Brec and the rest of her cutie castmates. Meet the characters below, CLICK HERE to tour the Bella and the Bulldogs set, then tune into Nickelodeon for the premiere on Saturday, January 17 at 8pm.

Would you trade your pom-poms for pigskin…and are you going to cheer on Bella during the series premiere? Tell us in the comments!