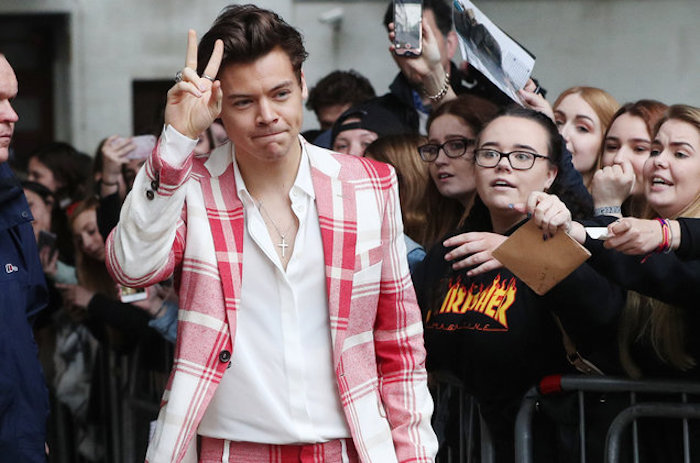 Unless you’ve somehow been able to avoid the internet for the last few days, then you know Harry Styles’s self-titled album was just released. You’ve also probably heard about the speculation surrounding this *very* important question: Are any songs on it about his ex Taylor Swift?!

When the tracklist was released in April, the title of “Ever Since New York” had fans coming up with theory after theory about the song being a response to Taylor’s songs “Style” and “Welcome to New York.” But is a song title enough to show Harry’s throwing shade at Taylor? Let’s check out the song lyric receipts!

Yes there's “Welcome to New York,” *but* another key factor here is that a lot of Taylor and Harry’s relationship took place in the Big Apple. That makes it more likely that "Ever Since New York" is addressing his relationship with her. Did Taylor welcome him to New York and totally change his life so much he wrote a song about it? With lyrics like “Choose your words 'cause there's no antidote for this curse. Oh, what's it waiting for? Must this hurt you just before you go?” it’s clear the track is about a person, a person he had a volatile relationship from. Taylor perhaps? Maybe, or maybe it's just wishful thinking...

That's not the only theory about the song, though. Some fans are saying the song is about a time in Harry's life he was achieving international solo fame and the media's unfair treatment of him. So the song could be about not just one person but the media. How's that for vague? Still, we like to think it's about Haylor, one of our all-time fave celeb couples.

Not convinced the album is about Tay yet? The lyrics of “Two Ghosts” might just do it for you. As any proper Swiftie knows, “Style” is supposedly about Harry. In the song she writes, "And I got that red lip classic thing that you like." Another lyric follows, "You got that long hair, slicked back, white T-shirt." Now check out the lyrics to “Two Ghosts.” "Same lips red, same eyes blue / Same white shirt, couple more tattoos." Could Harry be referencing Taylor’s trademark red lips and blue eyes? We know Harry loves rocking a good white tee, and the tattoos are a reference to his ever-changing look, and he's added quite a few tats since his 2013 split from T.

Finally, “Two Ghosts” also seems to reference Taylor’s “All Too Well” when Harry writes, “The fridge light washes this room white / Moon dances over your good side / This was all we used to need." In “All Too Well,” Taylor sings, "Cause there we are again in the middle of the night / We're dancing around the kitchen in the refrigerator light."

What did Harry have to say about his track? "I mean I think it's pretty like self-explanatory," he told his buddy Nick Grimshaw on his radio show last week. "I think, y'know, it's about sometimes things change and you can do all the same things… and sometimes it's just different, y'know." Well, that doesn't give us any definitive answers, but Nick was definitely hinting at it!

Is Harry’s album definitely about Taylor or are people making something out of nothing? Sound off in the comments!