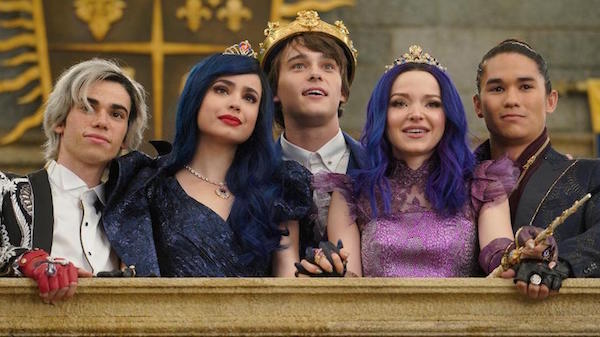 They say the show must go on, but this will undoubtedly be a tough one. The Descendants 3 cast is looking forward to sharing the franchise's third and final installment with you on Disney Channel tonight at 8 p.m., but they will be missing their brother, Cameron Boyce, who sadly passed away on July 6.

In a new interview with Good Morning America, Sofia Carson fought back tears as she tried to put Cameron's personality into words: "If you could bottle up happiness, that was Cam," she said. "He was pure happiness and pure joy, and I feel like none of us will ever be able to express exactly the kind of heart that Cameron was."

For the cast, it's still hard to believe that they lost Cameron so suddenly. Dove Cameron admitted that their last conversation was "pretty normal, you know? We all expected to see each other a lot more."

Booboo Stewart agreed, saying, "[Cameron was] like my little brother."

Dove also realizes that as sad as it is for the cast to watch the premiere without Cameron, it's just as tough for the fans. "I think that as absolutely heartbreaking as this one is, it is a personal loss for so many young people who watch Disney," she said. "I truly think the best thing we can do for them is to remember Cameron exactly as he was in—in the most positive light."

The cast has also taken to Instagram to share their words of encouragement for each other ahead of the premiere, and to remember Cameron.

Check out their posts below, and then tell us: Will you be tuning in to Descendants 3 tonight?

core four. forever and for always.

• Descendants 3 • . Tomorrow is the day. There aren’t enough ways to say, “thank you” that measure up to the amount of love you have all shown us and our movies. Tomorrow will be an emotional day for a lot of you and that’s okay. Thank you for all of the love you have shared and continue to share. Thank you . Photo by @kennyortegablog . . . @disneydescendants #descendants3 #d3 #descendants