On July 24, we were shocked—and *so* excited—when Taylor Swift dropped her surprise quarantine album folklore. But no one was more excited than Zara Lisbon: *obsessed* Taylor stan (aka Swiftie) and author of the novels Fake Plastic Girl and Fake Plastic World (where the main character is a Swiftie too, ofc).

"I was completely blown away by the suddenness of it," Zara says of the folklore album drop. "I had a suspicion she was recording an album, but my guess is that it would come out next year."

Though Zara's a big fan of Taylor's last album Lover, she sees folklore as the biggest Swiftie gift to date: "I *love* Lover. It's Taylor's most fun, and perhaps most diverse, album," she explains. "And until July 24, I was calling it my favorite."

That's when folklore dropped, and everything changed. "folklore is something else," Zara says. "It's a glass of water when I had no idea I was dying of thirst. folklore is a start-to-finish flawless work of poetry, storytelling and soul-soothing musical arrangements. It transcends." Her top 3 songs (for now)? "the 1," "exile" and "seven."—though she knows it'll change as she listens to the album even more.

We got *all* the deets from Zara on the things only a true Swiftie would notice in Taylor's latest album...and why folklore could be Taylor's most vulnerable work yet.

Girls' Life: What signs did Taylor give that an album might be coming?

Zara: "In April, she tweeted a photo of herself with the caption Not a lot going on at the moment. I just knew it meant she was recording something." 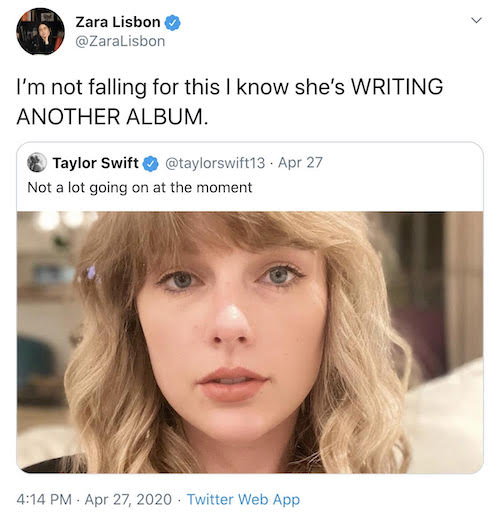 Another sign? "On May 14, Taylor posted a picture of cinnamon buns with the caption 'when you're proud of your buns so you post them on the internet.' Lo and behold, the back cover of folklore shows her with her hair in two buns."

GL: How is folklore different from past Taylor albums?

Zara: "According to Taylor, it's the least autobiographical. We've known Taylor to write about her heartache and personal relationships, but in folklore she dips out of herself and into the minds of various characters. She's telling their stories instead, channeling their darkness and sadness. And yet, the result is no less authentic than her previous work.

In some ways, I'd argue that this album is even *more* authentic, vulnerable and revealing than her others. She's revealing her psyche—which shows us more than her recountings of her personal drama.

GL: What would *only* true Swifties catch in folklore?

What Swifties notice: In Reputation's "This is Why We Can't Have Nice Things," Taylor references feeling so Gatsby for that whole year. This line could be a throwback to that 1920s-esque carefree year she had.

2. Lyric—In my defense, I have none/for never leaving well enough alone. - the 1

What Swifties notice: An echo of Lover's lead single "Me!" where Taylor sings I know I went psycho on the phone/I never leave well enough alone.

3. Lyric—When I felt like I was an old cardigan under someone's bed/you put me on and said I was your favorite. - cardigan

What Swifties notice: This line is reminiscent of the scarf from "All Too Well" that Taylor left at Jake Gyllenhaal's sister's house. According to the song he kept the scarf, but since their relationship didn't last long it's safe to say that if he *did* hold onto the scarf, it went somewhere unappreciated like under his bed.

Read: Who is Taylor Swift's "cardigan" really about?

4. Lyric—Filled the pool with champagne and swam with the big names. - the last great american dynasty

What Swifties notice: Back when she was feeling so Gatsby for that whole year in "This is Why We Can't Have Nice Things," Taylor sings that she was jump[ing] into the pool from the balcony/everyone swimming in a champagne sea. As it turns out, she was throwing those parties at her Rhode Island house, which was previously owned by Rebekah Harkness...who "Last Great American Dynasty" is about. On that note...only Swifties would know that Holiday House is *actually* the name of Taylor's home in Rhode Island.

5. Lyric—Bad was the blood in the song in the cab on your first trip to LA. - invisible string

What Swifties notice: A cute and clever reference to Taylor's hit "Bad Blood."

6. Lyric—Robbers to the east, clowns to the west. - peace

What Swifties notice: In Reputation's "Call It What You Want" Taylor sings all the jokers dressing up as kings, which is rumored to be a dig at Kanye West. Swifties might have caught the connection between jokers and clowns—not to mention that Taylor says clowns to the *west*—perhaps one tiny acknowledgment of her feud with Kanye in folklore.

What Swifties notice: This sound like a direct echo and reversal of the "Call It What You Want" lyric: he build a fire just to keep me warm. Now, it's the narrator, not her partner, who's providing the warmth.

Read: This song on folklore is a tribute to frontline coronavirus workers

What Swifties notice: This is a reference to her dark Reputation era followed by the purple-pink skies of her Lover era.

Lover, album out August 23. Cover shot by the artistic genius that is @valheria123 💗 Pre-add, pre-save, pre-order (all the pre stuff you feel like doing) Can’t wait for you to hear this.

9. Lyric—Stopped at a streetlight, you know I missed you" - betty

What Swifties notice: This echoes two distinct lyrics from Taylor's past. The most recent one from "Death By a Thousand Cuts": I asked the traffic lights if it will be alright, they say I don't know. The second one, three albums earlier, is from "All Too Well": You almost ran the red 'cause you were looking over at me.

What Swifties notice: Swifties are reminded of Speak Now's "Haunted" when Taylor swings you and I walk a fragile line, I have known it all this time/But I'd never thought I'd live to see it break. Is it a coincidence that the words "haunt" and "haunted" also show up in folklore?

11. Last but not least, on folklore we get at least two references to high heels. High heel imagery is nothing new for Taylor—let's remember back in "You Belong With Me" when she famously sings she wears high heels/I wear sneakers. Here, Taylor is not the high heel wearer. Then, two albums later, in "Begin Again" she sings he never liked it when I wore high heels, but I do. The hidden message? I wear heels now. Like a real modern-day feminist, Taylor shifts the connotation of high heels from oppressive to liberating, which Swifties will notice even more in folklore when she sings you'll find me on my tallest tiptoes, spinning in my highest heels.

What do all of these echoes and references mean? I couldn't tell you. But I do know that Taylor is speaking her own language—it's on us whether we choose to try to decipher it."

GL: What's something most people don't know about Taylor Swift?

Zara: "I've heard that when she was a teenager, she wrote a 350 page novel. I don't know if that's true, but I hope it is! I'd obviously love to read it."

GL: One folklore lyric you can't get out of your head?

Zara: "We never painted by the numbers baby, but we were making it count. You know the greatest loves of all time are over now."

Zara Lisbon is a novelist. She grew up in Venice, Calif. and has her MFA in creative writing from Vermont College of Fine Arts. Fake Plastic World is the sequel to her first novel, Fake Plastic Girl. 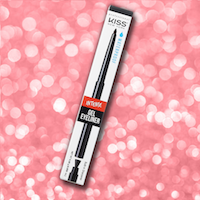