Why you *need* to check out Pride and Prejudice TikTok 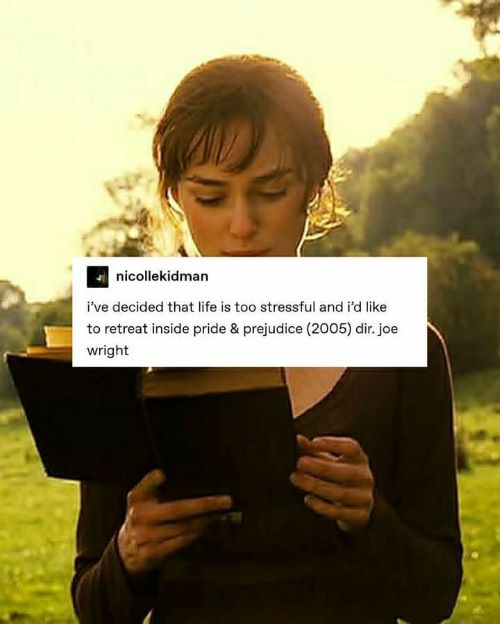 A romantic classic, Pride and Prejudice by Jane Austen continues to win hearts, despite being published over 200 years ago. Although the regency era situations might not be totally relatable, the characters remain loveable and admirable.

The whirlwind romance mostly focuses on Mr. Darcy and Elizabeth Bennet, who are enemies-to-lovers *goals*. Readers adore the comedic, but beautifully sweet, plot—which is part of why Pride and Prejudice can be found in many modern adaptations and parodies. The 2005 movie adaptation starring Keira Knightly and Matthew MacFayden is especially beloved, even finding its place as an inspiration for the dark academia aesthetic.

As usual, Gen Z has found creative and fun ways to include the classic in popular media. We know everyone has the "sides" of TikTok they're on, and Pride and Prejudice TikTok is one you definitely need on your For You page.

Pro tip: Romanticize your life. Even just with reading books. Because YOU are the main character of YOUR life 🌼 #fyp #aesthetic #prideandprejudice

TikTok bookworms and fans of the movie adaptations have started making Pride and Prejudice POVs, art, memes and just generally aesthetically pleasing TikToks romanticizing the fantastic world and ideals of the story.

Pride and Prejudice isn't a stuffy classic romance, despite its age. Underneath what seems like a fussy old regency era story, Jane Austen has witty comedy, characters that grow and change, and a female heroine who is a wonderful role model. Although Elizabeth Bennet is from an era where marriage was mainly an economic affair, she refuses to marry unless it is true love and both she and Darcy learn to grow past their pride...and prejudice (See what we did there?).

If you're looking to get into the dreamy and beautiful world of Pride and Prejudice, you *have* to check out it out on TikTok for the uplifting and romantic vibes you need in your life. Be sure to share your favorites with your squad group chat and think about organizing a group Netflix party of the movie, or even a virtual book club.

Share your favorite Pride and Prejudice TikToks with us @girlslifemag!