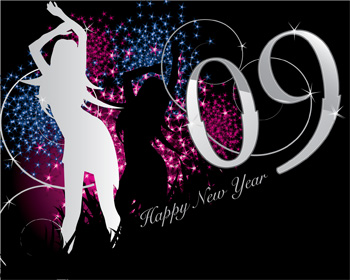 So long, 2008! It’s been real, but now we’re on to new and exciting movies, books, celebs, etc. We’re counting out the things we’re most excited for in 2009. And guess what? It’s lookin’ pretty fine!

2. 3 Willows, by Ann Brashares. Another young adult book from the author of the Sisterhood series? Oh yeah! It’s out in January.
3. The next Harry Potter movie, Harry Potter and the Half-blood Prince. It got bumped from November 2008 to July of ’09. Finally, it will be released!
4. Princess Protection Program and Camp Rock 2. Demi Lovato’s gonna be one busy gal this year, no doubt about it. We’re just glad we can sit back and watch.
5. 17 Again. Zac in another big screen role? YAY! The flick comes to theaters everywhere April 17.
6. American Idol is BACK! The show’s been around a looong time now, but the possibility of another great Carrie Underwood or David Cook is still oh-so appealing.
7. JONAS. OK, we admit it. We still love the JoBros as much as the next girl. Their TV show should be way entertaining, and we’re just as excited to see how newbies Chelsea Staub and Nicole Anderson are gonna do.
8. Victoria Justice. We did an interview on her in our Feb/March issue (make sure you check it out when it hits stands mid-January. She’s HILARIOUS). And she has tonsa stuff going on in ’09, including the Nick movie Spectacular (out in February), a Nick TV show, music and more. We have a feeling you’re going to be seeing a lot more of this gal.
9. Hannah Montana is taking a big, giant leap to the big screen. Will it be a success, a la HSM3? Or a bomb? We can’t wait to find out when it comes out April 10.

10. Secret Life of an American Teen returns Jan. 5 (with a potential wedding!!!). We totally dig Shailene Woodley’s portrayal of Amy.

Now YOU tell US—what are you most looking forward to in 2009?