Snag that dream job: I wanna...be a politician 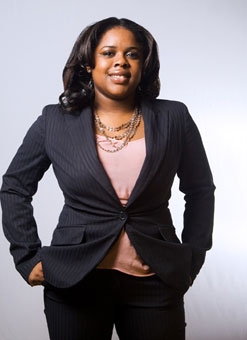 As the only member of her family to graduate from college, Phylesia Steele worked her education to her advantage and started a career beyond her years.
Looking up to influences like Speaker, Christine Quinn, and former Congress Woman, Dr. Una Clarke, this 23-year-old college grad is following in their footsteps. She works with the New York City Council as one of its legislative financial analysts.
For those of you who aren’t familiar with the New York City Council, it is the law-making body that presides over the city of New York, responsible for making decisions on land usage, monitoring the performance of agencies throughout the city AND has the job of approving the city’s budget.
What role does Steele play in all of this? She has her hands in a little bit of everything!

The list of responsibilities to the city that Steele has is astounding, ranging from monitoring and evaluating spending patterns to interacting with the mayor’s budget office and community-based organizations. And that’s just the short version.
To many of you, this may sound like a tough list of responsibilities for one person, but when you’ve got the passion and perseverance that Steele has, you find a way to get it all done.

Steele found that she wanted to work in politics after her sophomore year at Brooklyn College when she was unsure of what major to choose. She got the chance to work with the late Terence D. Tolbert, who not only was an aide to the city, but also to President Barack Obama during his presidential campaign.
“He was a passionate, innovative thinker,” says Steele. This experience stuck with Steele and she was fortunate enough to stumble into another position with a political official, and continued to work hard.

By the time Steele had finally enrolled in political science courses at Brooklyn College, she had been working throughout multiple offices of NYC Chancellor Joel Klein, at the intergovernmental Offices of Affairs.

She was able to not only get a feel for what it meant to work in politics, but was able to make connections. When she graduated in 2009, Steele worked for one city council member and now, she works with all of them!

Through it all, Steele faced some adversities. Always conscious of her age and her Jamaican background, she felt different, but “was fortunate enough to have an adopted family of female mentors that always pushed me to go further and not let anything stop me,” she says.
And now she is going strong in her newfound position, particularly taking an interest in education policy. She enjoys “being able to sit with all the key players involved in issues that ultimately affect 1.1 million New York City school children.”

Steele hopes one day to positively impact the lives of many more through her own legislation.