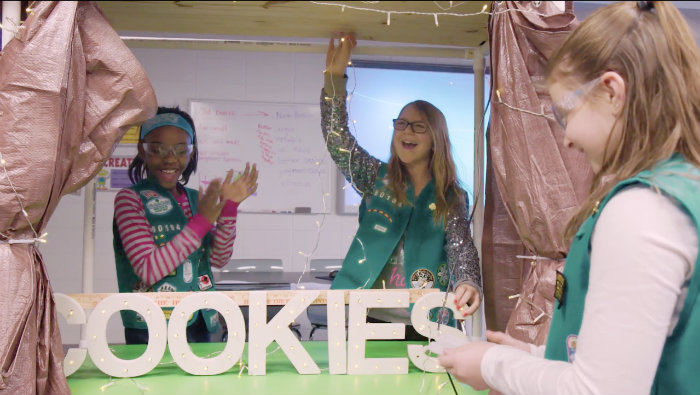 Each year when January rolls around, our cravings for Thin Mints, Samoas and Tagalongs start kicking in. Girl Scout cookie season is one of the happiest times of the year and this year the Girl Scouts are celebrating 100 years of serving up delicious cookies to your doorstep. But times have changed since they first started in 1917—and the genius girls from Troop 60194 in Chicago are proving it.

These Girl Scouts had big dreams to create their own portable cookie selling booth so they could raise money to deliver cookies to wounded veterans in D.C. They had the cookies, they had the decorations, they certainly had the brain power...but they reached an obstacle when they realized that they had nowhere to plug their twinkly lights in to make the booth light up (and  you can't have a booth without twinkly lights!).

"The biggest challenge we faced was probably trying to find a way to find an outlet because we used Christmas lights and there were no outlets outside. So we had to find a way to power the lights without having to use an outlet or anything. Which gave us the idea to use solar panels," Penny Quirke, one of the Scouts, explained.

With a new game plan, the girls reached out to Exelon, an energy company based in Chicago, to engineer the first ever solar-powered portable cookie booth. Exelon helped them with designing the booth, picking out the materials (PVC pipes!), 3D printing and ultimately creating the amazing cookie booth 2.0.  From their sales, they made enough money to go to D.C. and hand out boxes of cookies to retired armed forces. 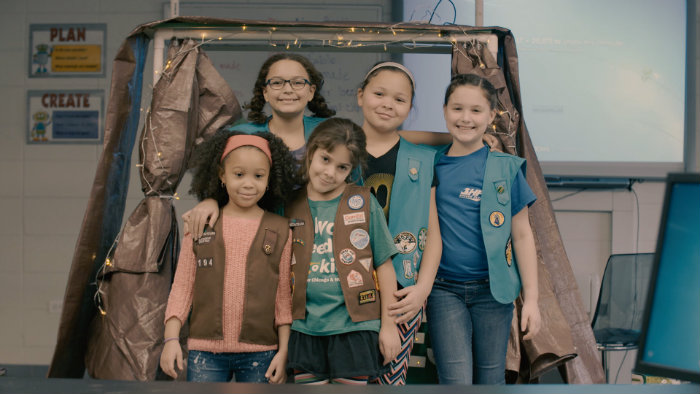 The Girl Scouts' biggest advice for other girls with big dreams? Never give up, even when it gets hard: "You should always try what you want because you never know...it might work and actually be successful. Even if it doesn't you can always think of a new idea that could be just as good." That's solid advice from Violet Quirke, another Scout who helped prove girls can do anything they set their minds to.

But according to the Girls National Collaborative Project, only 29 percent of women in the workforce are in the fields of science and engineering. Um, not okay! That's what makes it so important that young girls learn about these fields so they can be the future innovators and creators of the world. You don't have to be a computer whiz or chemistry master, either. If you love problem solving or being creative, for example, you could make an amazing engineer, says Betsey Soehren Jones, the troop leader and president of Network of Exelon Women.

All you have to do is keep an open mind. Try out new clubs or activities (like the robotics team!) that challenge and interest you. And don't be intimidated if those sorts of interests or hobbies are mostly boys. You can inspire other girls to follow their dreams, just like the Girl Scouts are doing with their solar-powered booth. It just takes a little bit of courage and a lot of determination.

Are you a girl interested in math, engineering or science? Tell us your dream career below!

Like this? You'll love these, too...
+ These amaze girlbosses are proof you can start a biz at *any* age
+ Our guide to landing the summer gig of your dreams
+ 6 things we learned from Career Girl Daily on how to start a blog (and a business!)