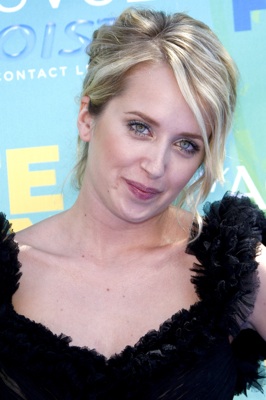 An ugly stepsister from a Cinderella fairytale is just about the last person we’d think about turning to for fashionable advice. But you better brace yourself, because the newest evil sis actually has some classy things to say.

Megan Park might be playing wicked stepsis Bev in A Cinderella Story: Once Upon A Song (on DVD Sept. 6), but trust us when we say this chica is totally sweet in real life. We got a chance to hang with the Secret Life of the American Teenager star on the flick’s North Carolina set, where the star spilled some chic secrets we just HAD to share with you.

She hearts Urban Outfitters. “My personal style is preppy classic with a little bit of boho flair in there every once in a while. I love peasant tops and flowy dresses, but I tend to go more toward the classic stuff.”

She considers boots to be a school year staple. “I like the back-to-school [season] because it’s like you can reinvent yourself every year. I love the boots with the knee socks pulled up. If you have a uniform, it's a great way to change that look up!”

She went through a Prairie fashion phase. "I was pretty much in costume for a full year of my life because I became obsessed with Little House on the Prairie by Laura Ingalls Wilder. I dressed in full-on pioneer clothing: Straight up pantaloons, boots, bonnet, dress all day for like all of first grade. I don’t know what it was. I was obsessed with pioneers.”

She takes fashion cues from Miley Cyrus. “I did a movie with her (So Undercover) and she had these great Alexander Wang boots that she wears in the Justin Bieber: Never Say Never movie. They have the heel that goes in with the metal. I used to steal them from her all the time.”

Be sure to catch Megan in A Cinderella Story: Once Upon A Song and on ABC Family’s The Secret Life of the American Teenager.

Do you heart Megan’s style? Blog about it, babes.
Love this post? You'll heart these, too!
» The stars of Degrassi share their BTS style