Last night we went way back in time to the Rat Pack era. The remaining 5, all looking extremely sharp might I add, totally rocked the house with their jazzy yet current renditions of classics. Jamie Foxx acted as a mentor and even he knew that the contestants were headed for greatness.

Kris Allen started off the night singing “The Way You Look Tonight.” His performance was terrific, as he did the song justice and still remained true to himself. Kris made the song current, but didn’t lose its jazzy feel. Paula thought that his performance was near impeccable and Kara agreed stating that he def set high technical standards for the night. Simon simply thought the song was “wet,” whatever that means. A- 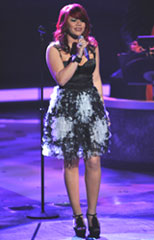 Second was Allison Iraheta singing “Someone to Watch Over Me.” Allison’s vocals blew me away and she totally sounded way beyond her years. Her soulful/raspy tone went along absolutely perf with the song choice and the judges loved her rough style. Kara even thought that this performance should land her in the finale and Paula was proud, as always. A

Singing third was Matt Giraud with “My Funny Valentine.” Although I am a Matt fan, this performance was not one of my faves. It started out a bit shaky and I agree with Randy that it was pitchy in places as well. I def think it picked up by the end and Matt hit that last note with ease, but “absolutely brilliant” as Simon referred to it, I have to disagree. I have a feeling Matt may not make it to the top 4, but we shall see soon! B+ 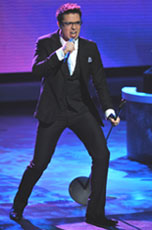 Next up was Danny Gokey singing “Come Rain or Come Shine.” Danny gave a passionate performance and his smooth soulful tone was totally on key. I was hooked until the very end and so were the judges! Kara and Simon pointed out Danny’s stylish swag and Paula thought it was stellar. Go Danny! A 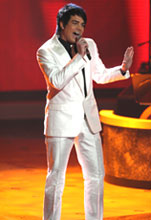 Last was Adam Lambert singing “Feeling Good,” which had the audience feeling great. Adam had a whole new take on the song and gave it that Lambert rocker twist. His vocals were amazing and his screams were super. Although the performance may have been a bit over the top, it was entertaining nonetheless and even “sleazy and superb” as Kara would say. A+

The top 5 performed some radical Rat Pack renditions, but unfortunately one idol must leave us. It’s ultra sad to say, but I think Matt Giraud may be the one to get cut. What do you girls think? Which performance was your fave? Tell us your thoughts!