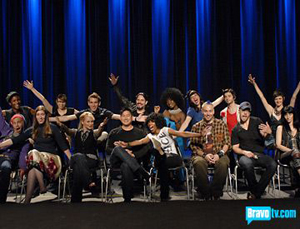 Sigh, it seems like it was just yesterday that Christian (PR winner season 4) was bawling his eyes after winning the coveted title. I was totally aloof to the start of the new season until a clip popped up at a chance meeting while watching another one of my Bravo faves (Flipping Out!). But nevertheless, here we are again. A fresh new crop of 16 designers from all walks of life back at the all too familiar Atlas building on the streets of NYC!

One-by-one new faces walked through the doors introducing themselves with awkward conversation that only comes from cramming a massive amount of flamboyant strangers into one tiiiny room. I tried to keep track of all 16, but it was mighty tough. You’ve got your designer wannabe zoologist, small boutique owners, up and comers, name droppers and even Mr. Fake and Bake to name just a few.

After all the names were put to faces, newbies headed up to the infamous rooftop to meet who else but Tim Gunn and Heidi Klum. Dude, Heidi has like some sort of supernatural power. Doesn’t the woman age? She looked positively fabulous. But thank goodness she still retained her scary humor even though a wrinkle wasn’t in sight.

The next morning, or shall I say evening for some, Tim pounced on designers the way only Mr. Gunn could do—with a 4 am wake up call! I felt so bad for them—I’d die! As each groggily awoke, manic mania broke out as they hustled and bustled to meet Tim on the streets.

Designers headed to face their first challenge and abruptly came to a halt at Gristedes (a popular supermarket chain in NYC). To greet them was a familiar forever-ago face, Austin (from Season 1), the champ of produce to pizzazz production.

The Challenge: Create a design of your choice with materials found in Gristedes on a budget of $75 dollars.

Off they went, running of course. Because if you’re on PR its apparently a requirement that you have to run EVERYWHERE you go to strike fear and terrorize shoppers and retailers alike. Some folks had their visions in mind, others just grabbed and grabbed all that was in sight. A few fun purchases were mop heads, Solo cups, bouncy balls and asparagus?! Eek.

Back at Parsons, designers unbagged their groceries and went to work. Was it just me or did Parsons get a makeover? Anyhoo, I digress. With the challenge ending at the stroke of midnight, designers frantically got to sowing to avoid any pumpkin disasters.

It was fun to see what everyone bought and I couldn’t wait to see what they would engineer. Joe’s boxes of pasta were def intriguing and Daniel’s Solo cups seemed impossible. And we can’t forget about Miss Kelli, who kinda reminded me of Elisa from Season 4, with her bleaching vacuum bags and setting fire to coffee filters. Yikes! Everyone seemed to be groovin’ except for one poor soul, Stella whose trash bags put her OG idea into well, um, the garbage.

As Tim made his rounds, he was totally bummed out that SO many designers took the wimpy way out by buying table cloths. I totally agreed when he called them “slackers.” This definitely put a fire under each bum as all tabletop lovers tried their hardest to spice up their pieces.

The Showdown: On runway day, models filed in and headed out equally as fast (many with designers still attached to them). Lights, camera, action!

Kelli was the challenge winner. And I do agree with the judges, well partially. The skirt is amazing and so cute. But the rest of the “dress” I’m not too sure about. Doesn’t it kinda scream mermaid? Even though I don’t love the whole Xena look from Daniel, I do think he should of won sheerly based on the amount of effort it must have taken to construct his cocktail dress. Wowza!

Now if you know me, ya know I’m a total girly girl that goes gaga for anything super flirty and cream puff-esk, which is why I had to include my personal faves. Hee! Leanne’s dress was so adorable and yummy, while Wesley couldn’t have made a tablecloth look more sophisticated. And last but not least, Joe made the cutest top with oven mitts!

Yes, the trash bags aren’t great, but we have no time to discuss this when Jerry’s questionable styling and Blayne’s horrific contraption is before our eyes. Heidi said Jerry’s model looked like a plumber. Michael said she looked like she came from an insane asylum. All I have to say is, word up! The judges hit the nail on the head with that one. What was the man thinking? Why the rubber gloves? Why Jerry, why?!

And even though Michael described Blayne’s outfit as an “old dirty diaper” I am totally at a loss for words. After much deliberation, Jerry got the German send off. Honestly, though I’m totally thinking Blayne should have left. At least Jerry made clothes, what the flip was Blayne’s garment? Can some one please shed some light for me? Ugh-a-lug, for sure!

Next week, we have PR firsts and PR fights! Till then I’m signing off and shutting me mouse!