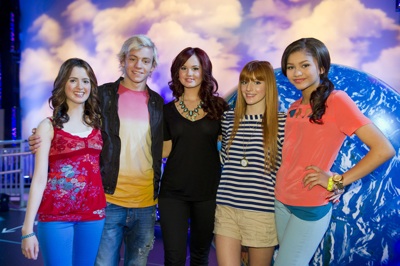 Debby Ryan from Jessie, Shake It Up stars, Bella Thorne and Zendaya, and Ross Lynch and Laura Marano from Austin and Ally teamed up with more than 100 youth leaders from all over the globe this past weekend for a two-day celebration at the Walt Disney World Resort. The celebration was put together to give kudos to heroes and heroines making efforts to save the earth, as well as organizations dedicated to helping kids get involved with nature.

So what exactly went down? On Friday, the Disney Worldwide Conservation Fund Awards Ceremony not only had a speech by Robert A. Iger, The Walt Disney Company’s Chairman and CEO, but the McClain sisters also took to the stage, performing their hit song “Rise,” featured in Disnynature’s upcoming Chimpanzee (in theaters April 20), which also made its world premiere that day.

Hosted by Radio Disney’s prime celebrity, Ernie D, the Disney Friends for Change Youth Summit was then held on Saturday for the stars to help the leaders in progress be inspired to think creatively and focus on solutions for positive impact throughout the world. They took part in discussions, panels and workshops to picture the future of their planet and talk about efforts for conservation, walking away with tonsa fresh ideas.

Did you know that, up until now, kids in 33 countries have worked on five million projects through Friends for Change, and $4.5 million have been donated to nonprofits by those projects. So cool, right? Want more cool deets on how you, too, can be a part of the action? CLICK HERE.

Snag a peek at what happened during this past weekend’s events below…
What are you doing to help save our planet? Blog about it, babes.
Love this post? You'll heart these, too!