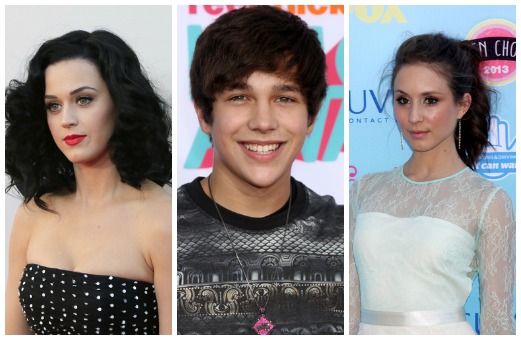 The weekend is almost here, which means that another week full of celeb gossip has passed. This week was full tours, break-ups and so much more. Who showed off their skills and who can hear the wedding bells? Read on for the scoop.

Not only is Louis Tomlinson living out his dream of becoming an international pop star, he’s also fulfilling his childhood dream of becoming a professional football (soccer to those of us on the other side of the pond) player. This week, Louis donned 9 a Doncaster Rovers uniform and hit the field as a sub in the 65th minute of the game. This charity match against Rotherham United raised funds for Bluebell Wood Children’s Hospice, a charity that Louis frequently visits. How cute is that?! While the game ended in a 0-0 score, Louis took to his Twitter to explain how incredible of an experience it was. We just hope that he won’t be trading in his microphone for a ball anytime soon.

It’s about time! Austin Mahone finally hit the road this week on that MTV Artist To Watch Tour that was postponed due to an illness. From the looks of it, the show is amazing. Just one sneak peek shows there’s some insane acrobatics flying on the stage. Austin tweeted out to his 5 million followers this week after the tour’s first show in Miami, saying, “Amazing first show!!! Perfect start in Miami :)” If Austin is coming near you, make sure to grab tickets! This is one show you’re not going to want to miss.

One of our fave Liars, Troian Bellisario (Spencer), recently announced that she is engaged to longtime boyfriend Patrick J. Adams! In true Liars fashion, she’s kept it a secret, too. Apparently she said “yes” back in early January and has been keeping it a secret. We are so excited for this adorable couple and know that their wedding is going to be perfect in every way. Congratulations, Troian!

Queen of Pop Katy Perry has reportedly called it quits with boyfriend John Mayer and we don’t know how to feel. Just a few weeks ago the cute couple was spotted dining together and engagement rumors started to fly. One source claims to Us Weekly that it was Katy’s hectic Prismatic world tour schedule that might be reason to blame, saying, “She's stressed about the tour, they've been fighting.” We loved this power couple and hope that they try and work things out.

Raise your hand if you loved watching Gracie Gold own the ice during the recent 2014 Winter Olympic Games. Well, the athlete got an even bigger surprise this week when one dude apparently “melted” her heart. High school senior Dyer Pettijohn posted a YouTube vid that went this week, asking Gracie to prom. He listed a few reasons why the two are compatible (like the fact that she’s “gorgeous”…and his mom thinks he’s pretty) and even stated, "The Olympic judges got it wrong—you're the only gold I see." So did Gracie accept? Word on the street is Gracie said if it works with her sched, she’d love to! Not gonna lie, we think these two make an adorable pair.

Check out Dyer’s too-cute vid below…