Exclusive: The Fosters' Hayden Byerly gives GL the deets on Jude and this season's drama 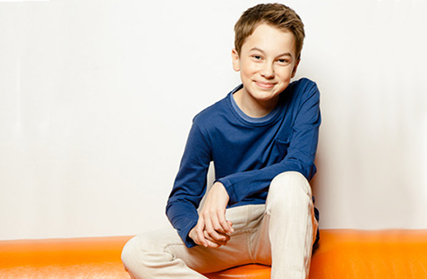 We already talked to Gavin McIntosh (the other half of Jonnor) in our Feb/March mag, but a couple days ago we got the chance to chat with Hayden Byerly who plays Jude in the drama-filled series The Fosters. Hayden's been hard at work filming new episodes of the hour-long family show, but he had a spare few minutes to fill in GL readers on what it's like to get emotional on set, holding out hope for Jonnor and having the strength to follow your heart. Check it out.

GL: Congrats on getting renewed for a third season! What can we look forward to seeing in season two?

Hayden: There’s a lot of fun stuff that’s happening this season. It just gets better and better, right? In this upcoming episode that we’re about to see, Jude and Connor have a bump in the road. It's nothing too crazy, but it definitely hurts their friendship. We also get to see a lot more with the family – Mariana’s dancing, Brandon’s piano playing and then the crazy love triangle going on with Callie. This season is jam packed with a lot of exciting stuff. There are definitely some hard hitting moments, but there are always other times that bring you back up.

GL: Sounds crazy! What's it like for you to play such emotional scenes?

Hayden: It kind of drains you. You definitely start to put some of your own emotion into it. If you’re in a scene where your character is crying, you start to get it out and then you start actually crying – it’s very emotionally draining, but to be able to portray different characters that have these different emotions is exciting, especially for my career and becoming better at what I do.

GL: We know you can't say much, but is there any episode in particular you're excited for?

Hayden: Episode 18 (the eighth episode of the second half). There's a moment that I am very excited for fans to see. I can't tease any of it, but I’m very excited for the reaction and very anxious to see what people will think of it.

GL: We'll be watching! So spill a little on Jude and Connor – is there any hope for Jonnor fans?

Hayden: I would say that there’s some hope for them to fix their issues. Maybe it’s just a little hiccup in their friendship. I mean, people can be very forgiving but some people hold grudges, so it’ll be interesting to see. You never know.

GL: Jude and Callie have already been through so much. Do you think they can overcome all of the adoption drama?

Hayden: I really hope so. Being on the show and playing Jude, I kind of have a bias, but whether or not Callie stays with the Fosters, I definitely think that her relationship with Jude will always be strong. I think they’ll always have a very close and special connection.

GL: So what's your favorite part about playing Jude?

Hayden: I think everything about his storyline is super exciting and I’m so honored to play such a cool character on a very important TV show. The fact that he’s such a kind, understanding person who has these moments with questioning his sexuality and going through hard times in the foster system with his sister and then finding out that his sister is now his half-sister – It’s crazy to see some of the stuff that’s happened to people and how it builds and brings them up, how they work through it and become better people for it. It’s cool to be able to play with Jude and become him and go through these effects and changes with him.

GL: Do you have any advice for fans who are watching Jude explore his sexuality and sharing that same journey?

Hayden: Everyone’s different. As long as you own who you are, that’s the only thing that’s important. Don’t let anyone make the decision for you. I feel like that’s something that happens a lot, where people aren’t who they are supposed to be; they go down a different path because that’s what they think will make everyone else happy. I think that they should make sure that they’re happy.

What do you think of Hayden's advice? Are you glad to see such a groundbreaking show like The Fosters on your TV? Let us know in the comments and don't forget to tune in for the second half of season two, starting back on ABC Family tonight (1/19) at 8:00 p.m.