Exclusive: We got the deets from Rowan Blanchard and Sabrina Carpenter on season 2 of Girl Meets World - starting tonight! 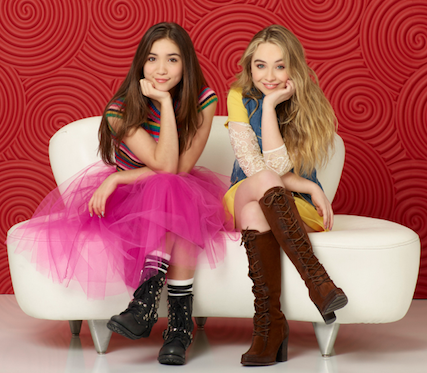 After watching all the reruns of Boy Meets World, we knew going in that Cory and Topanga alone would have us falling in love with Girl Meets World. Once we'd tuned in, though, it was Rowan Blanchard's Riley and Sabrina Carpenter's Maya that really stole our hearts.

We chatted with the two teen stars and BFFs (on-screen and off) about the new season of the show, premiering tonight (5/11) just in time for Sabrina's birthday (Happy 16th, Sabrina!) on Disney Channel at 8:30 P.M. about what they're excited for fans to see, what their favorite moments have been so far and what we can expect from the new episodes. Check it out.

GL: What are you guys looking forward to most in the new season?

Rowan: I'm excited to watch the characters grow and mature.

Sabrina: I can't wait for them to see the maturity level we go through and all the surprises we have in the upcoming story lines.

Rowan: We have amazing writers that know us all so well and incorporate that into the writing.

GL: Which episodes are your favorite?

Rowan: There are some episodes in Season 2 that we have shot that are amazing.

Rowan: As far as season one, though, I love “Girl Meets Little Brother” and “Girl Meets 1961.”

GL: If you could only use three words to describe season two, which would you use?

Watch the promo for tonight's episode below.

Will you be watching tonight's new episode? What are you hoping to see this season? Let us know in the comments and don't forget to wish Sabrina a happy birthday!