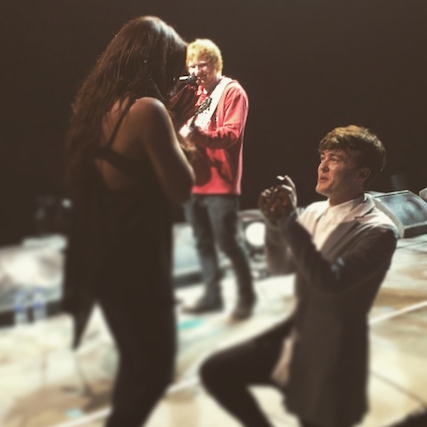 Little Mix's Jesy Nelson and Rixton's Jake Roche are one of the cutest music couples in the game. Whether they're taking selfies together on Instagram, sharing their hilarious texts or talking about each other in interviews, these two are clearly gaga for each other. But over the weekend, Jake took their relationship to the next level: he proposed!
During Ed Sheeran’s Key103 performance Sunday night, he invited his close friends Jake and Jesy up on stage to celebrate their one-year anniversary. And when Jesy walked out, Jake and Ed had a surprise for her (hint: it included a ring). Jake got down on one knee and asked Jesy to marry him (with Ed Sheeran supplying them with some background musical accompaniment) and she said Y-E-S.

Later that night, the couple went straight to Instagram to spread the good news. Sharing a picture of himself down on one knee, Jake wrote, “A year ago today I met her at Manchester Arena, so it was only right, with a little help from my friend, that this happened. Best day of my life."

Jesy added on her own Instagram, “I cannot believe what has just happened! The most surreal moment of my life and everyone that I love most was there to share it with us! I feel like the luckiest girl in the world rite now literally cannot stop crying! Future Mrs Roche ??” 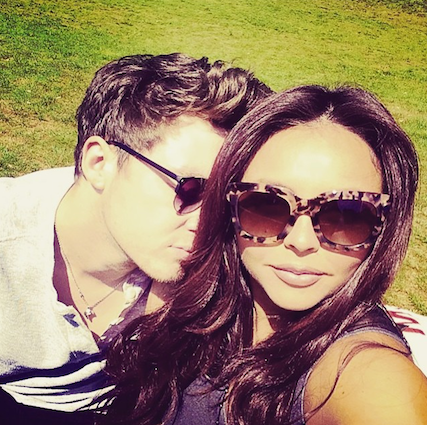 Although the couple has only been together for a year, their bandmates have been super supportive about the whole engagement. Jesy's Little Mix band member and best friend Leigh-Anne Pinnock even went as far to say, "Never before have I ever seen a couple so made for each other." Aw!

Are you happy for the newly engaged couple? Don't forget to congratulate them in the comments below and on Twitter!