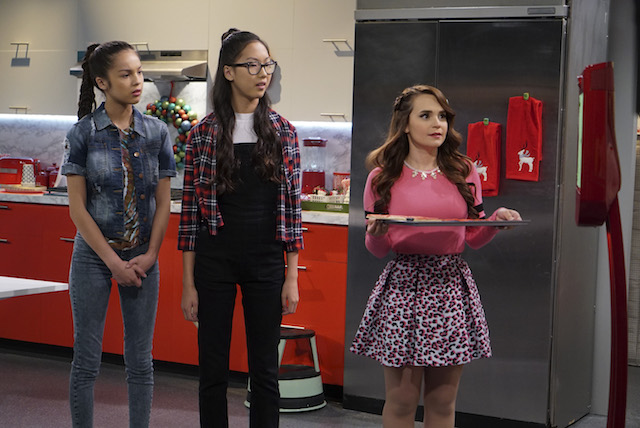 If you’re bonkers for baking and even *more* bonkers for Bizaardvark, we have some fab news for you! YouTube baking star Rosanna Pansino is guest-starring on the new Bizaardvark episode this Sunday at 8 p.m.

In this holiday ep, “Agh, Humbug,” Bernie stops by Rosanna’s baking show for a collab. His goal? To get 10,000 subscribers so he can be invited to the exclusive Vuuugle holiday party along with Paige, Frankie, Amelia and Dirk. Well, that's if Dirk can find the time. He's busy trying to find the perf prezzie for his pal, Horse Face. Turns out that IRL Dirk, Jake Paul, is a mega-generous gift giver. He told GL that one year he gave his dad so many gifts that it overwhelmed him. "I was online shopping and just thought he would like everything!" Turns out, he did. Hopefully Dirk is just as good of a gift giver as Jake...

Hmm, we're thinking Dirk could use one of GL’s gift guides. Speaking of presents, we chatted with the cast of the show all about 'em! They spilled on the best gift they've ever received.

DeVore Ledridge has clearly always been about Disney Channel. She told us that the Kim Possible sweatshirt she received from her Aunt Julie when she was 9 tops any other gift she's been given. Olivia Rodrigo’s pick is just as sentimental: a box of sealed notes from her friend. “They have the power to make any bad day awesome,” she gushed. "The most expensive present in the world wouldn't come close to how much it means to me." Ethan Wacker's fave? The go-cart he got when he first moved to Honolulu! That just might top the dog Madison Hu received one year.

What's the best present *you've* ever received? Let us know in the comments!