Peyton List designed the chicest shirt--win it here (and wear it this Sunday!)

You know Peyton List as the lovely Emma Ross from shows such as Jessie and BUNK'D—but if you follow Peyton on Instagram, you'll also know her as a seriously inspiring statement-maker and total fashion risk-taker. (Psst: If you missed her #unfiltered essay in GL's October/November 2016 issue, it's a must-read). She looks fab on every red carpet she steps on and she's always up for trying out a new trend. That's why the NFL Juniors ambassador was the perf choice to design this year's one-of-a-kind shirt for Super Bowl LI (catch it this Sunday, Feb. 5 at 6:30 p.m. ET on Fox).

Ahead of Sunday's fun-filled day of football, fashion and food, Peyton dished to GL about her game-day plans, shared her style tips for rocking the chic shirt (peep the design below!) and even spilled some deets on BUNK'D's upcoming finale. For more stylish and sporty secrets, read on—and hit the pink button below for your chance to win one of Peyton's tees. Touchdown! 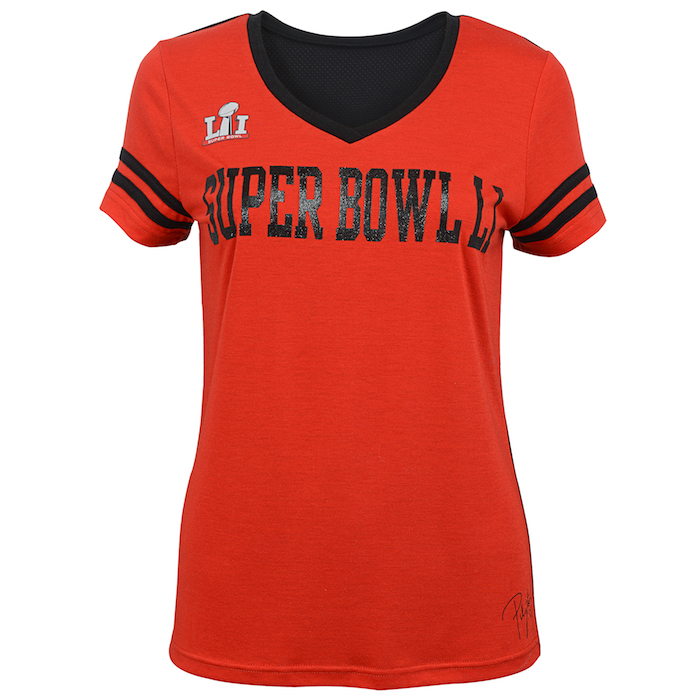 #TeamGaga
The Patriots and Falcons might be playing on Sunday, but who Peyton is rooting for will *totally* surprise you. "You know what? I’m rooting for Lady Gaga, really. I can't wait to see her perform during the halftime show! My favorite song is 'You and I' from her older album—she is seriously so talented."

Game-day game plan
A good crew and good food are all you need for an A+ Super Bowl Sunday. So who is Pey partying with? "My brother, Spencer, is in NYC, so I’ll invite his best friend in L.A. over to watch at my house." They'll be snacking on the ultimate in yum: wings and fried pickles. "I’m really into Super Bowl food. Wings are a must, but I go super mild. I’m such a baby when it comes to spice. We'll do cheese dip—ooh, or spinach dip—with pretzels. Pretzels and dip is a *huge* thing in my family."

Halftime huddle
Half the fun of the Super Bowl is watching the LOL-worthy halftime commercials. There have been *so* many good ones over the years, but for P, nothing tops the Doritos spots. "I loved the commercial one year where the little boy—I guess some guy is hitting on his mom?—tries to take a Dorito and he turns around like, 'Don’t mess with my mama! Don’t mess with my Doritos!' I think it’s *so* cute." 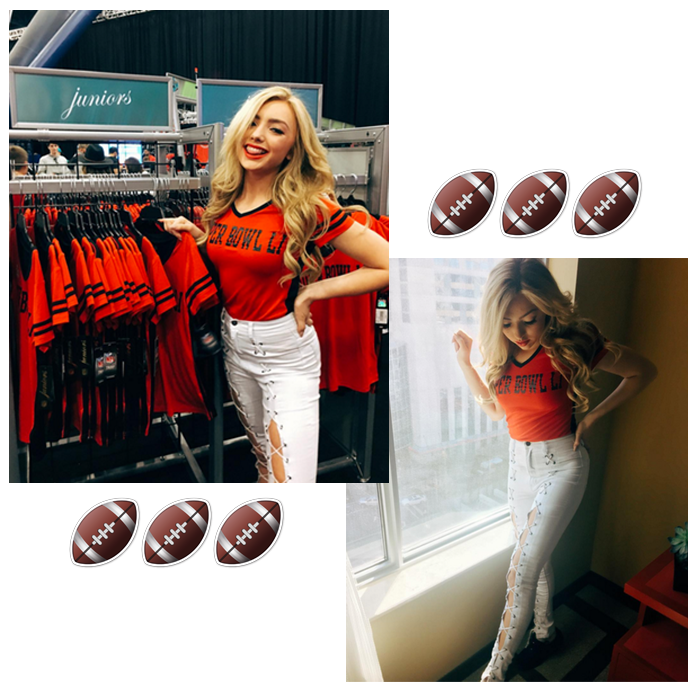 Fashion touchdown
Peyton's Super Bowl LI tee is a total touchdown already—but with her smart styling advice you can make it all your own for the big game. "Try it with sneakers and high-waisted jeans like I'm wearing, and you can even add a really cool choker because it has a V-neck. If you want to wear it out at night, pair it with a skirt and heels. Or for something simpler, knot it in the back and drape really pretty jewelry over the neckline. Honestly, there are so many things you can do with it!"

Paris for the day
Over the holidays, Peyton took the trip of a lifetime to Paris where she spent nearly every waking moment in awe of the city's très trendy girls and guys, snapping pics of every elegant outfit that caught her eye—much to the chagrin of those around her. "Here in the States, we take photos of everything. That’s just what we do, we Snapchat. People [in Paris] were constantly yelling at me for it, but I didn’t care. I just loved taking photos and getting inspiration from capturing different things." By the end of her trip, P's phone had 15,000 photos on it!

Pey's unofficial uniform
When it comes to getting dressed on the daily, there's one thing that Peyton *must* have: denim. "I have so much denim, it’s insane. I also love the brand RUMI. They have great off-the-shoulder white tops, off-the-shoulder black tops and skirts." But what shoes will she rock with 'em? "Everyone should have just one amazing pair of shoes—or boots—that’s their go-to. I have a black pair of Chanel boots that I just treasure and I can wear with really anything."

On the Outskirts
This year, Pey will star in the movie The Outskirts alongside Victorious alums Victoria Justice and Avan Jogia, as well as Eden Sher (The Middle) and Will Peltz (Unfriended). But it's Pey's role as Emma Ross on BUNK'D that she's most well-known for. "The finale for season two is *crazy*! I can’t exactly say what happens, but, well, it’s an amazing episode that you don't want to miss."

A winning strategy...
+ Sport your style. CLICK HERE to snag Peyton's limited-edition NFL juniors tee.
+ Walk off with a win. Click the pink button below for your chance to snag the chic shirt for *free!* We'll announce one winner this Thursday.
+ Catch the game. Tune in to Super Bowl LI this Sunday. It's all going down at 6:30 p.m. ET on Fox.