Who is the rat of your dreams? For Gen Z TikTokers recently, it’s the Disney animated film Ratatouille star and Parisian chef Remy.

In August, creator Em Jaccs (@e_jaccs) uploaded her ode to the clever rodent in a TikTok, singing, “Remy, the Ratatouille, the rat of all my dreams…” A couple of months later, composer and arranger Daniel Mertzlufft (@danieljmertzlufft) took Em’s song, added some instrumentals, a few vocals, and a hefty sprinkle of magic to transform it into a grand ensemble number straight out of a Disney movie. Daniel’s composition garnered millions of views and soundtracked thousands of TikToks dedicated to Ratatouille, quickly becoming the title track of the movement.

Ratatouille the Musical has ever since been recognized on the IG account of Disney on Broadway, several large theatre publications/magazines and Patton Oswalt, the voice of Remy himself.

What first started as a joke was taken up as a challenge by actors, make-up artists, backstage crew, dancers, singers, musicians, costume designers and graphic designers from all over, working in tandem to create the (arguably) best musical of 2020.

Every Broadway production has a Playbill, and Ratatouille the Musical is no exception. Artist Jess Siswick (@siswij) offered her imagined program, the cover art featuring a forkful of Ratatouille (the dish) in the shape of a rat. The *official* Playbill magazine has even recognized the musical, dedicating an article to present “The Official (Fake) Ratatouille Playbill.” 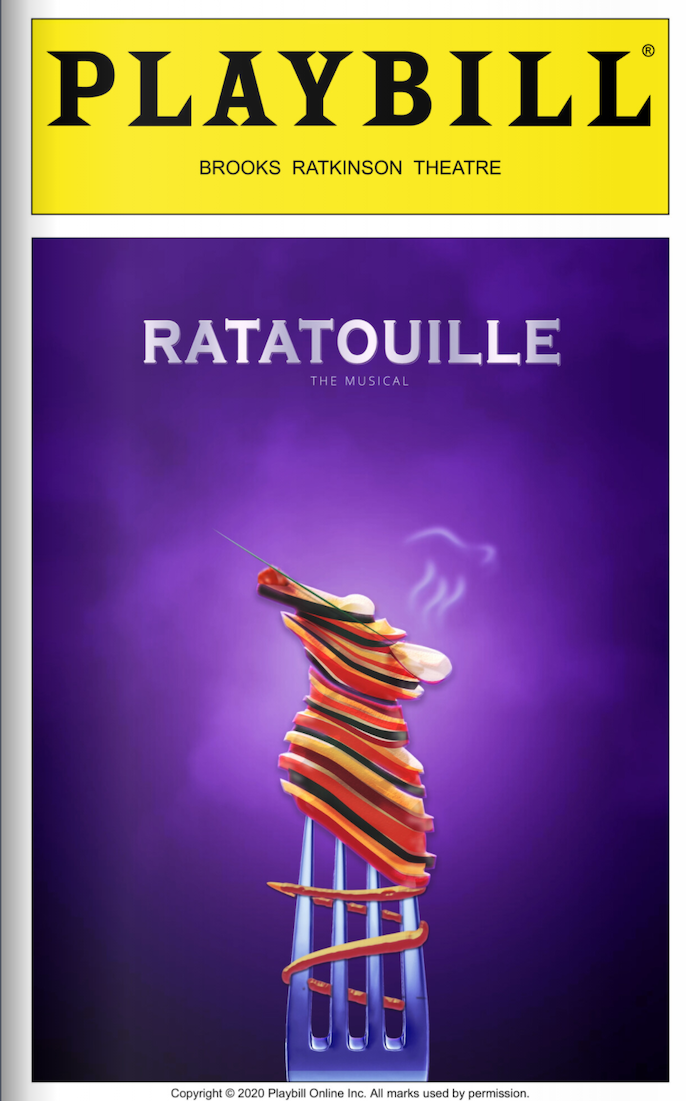 Once “Ode to Remy” blew up on TikTok, Ratatouille the Musical became its own corner of TikTok, inducing dozens of singers and songwriters to contribute original musical numbers for creators to "submit submissions” to, as well as parodies and variations building upon them. The full list of songs is in the unofficial official Playbill, but here are some of the highlights!

Even though Remy is the star, we can’t forget about the characters who shape who he is. A personal favorite, @blakeyrouse wrote Tango for Colette and Linguini, for the characters that make up the central romance in the movie, singing Linguini’s part. Several creators—one being @aaacacia_—have duetted his TikTok as Colette, sporting the heavy French accent and the snappy, passionate attitude essential to the character.

Taking a look from the other side of Remy’s fine-dining life, @fettucinefettuqeen developed the song “Trash is Our Treasure” for Django, Remy’s dad.

♬ Trash is Our Treasure - Gabbi

With a wholesome and inspiring message, @rjthecomposer presents “Anyone Can Cook”

♬ Anyone Can Cook - RJ Christian

Choreographer @tristanmichaelmcintyre cooked up an awesome dance to go with the song, sparking a slew of dance submissions as well.

Broadway actor and Jimmy Award winner, Andrew Barth Feldman, performed a song for the musical written by @fozzyforman108 as Linguini.

Ratatouille the Musical has given artists across all disciplines the opportunity to add their own special little something to the mix, from choreography to puppetry.

Creator @ardellyfoshelly drew up stunning yet costumes for rodent back-up dancers using lightweight tulle reminiscent of ballet skirts. Upon her video's blow-up, she shared her ideas for Remy, Colette, Linguine, and Anton Ego's costumes as well.

Broadway puppet designer @brandon.hardy.art gives his insight for Ratatouille puppetry, duetting the musical numbers with his rat puppet costume as a demonstration.

Makeup artist @morgainemade offered herself up as tribute for the makeup department of the musical.

“Even if you’re small, you can do big things,” says NYC director @brandon_powers, in his TikTok on his Ratatouille directorial approach, explaining the significance of scale. He walks us through his ideas for a blend of Art Nouveau and oversized objects for the set design, shadow puppetry for additional effects and ending the musical with the lingering smell of croissants.

However, you don’t have to be a professional to have a great idea. Creator @jackattackcleary80 offers his vision for the discontented food critic, Anton Ego, detailing an explosive and emotional climax.

Whatever becomes of Ratatouille the Musical, it’s certain it’ll always be something to look back on with comfort and awe (like c’mon, an entire musical from scratch!). In these unprecedented times, our (arguably) favorite generation has concocted an unprecedented creation.

Just like in the original story of Ratatouille, the TikTok musical has taught us that not only anyone can cook, but *anyone* can create.

via GIPHY
p.s.
But, like, Disney Theatrical Productions, can we make this a real thing?