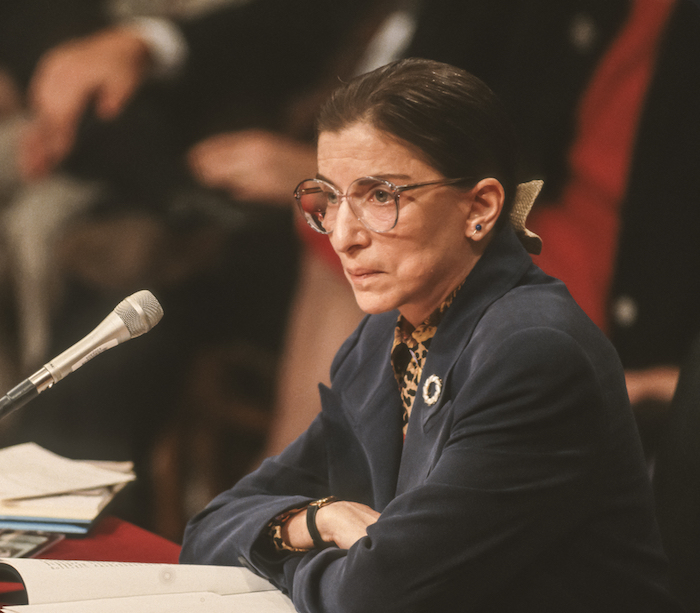 Supreme Court Justice Ruth Bader Ginsburg passed away on September 18 after enduring a battle with metastatic cancer of the pancreas. The renowned lawyer and activist served a remarkable 27-year tenure on the Supreme Court after being nominated by former President Bill Clinton in 1993. Known for her withering dissents, Justice Ginsburg amassed an impressive record advocating on behalf of women's rights and social justice. To honor the legacy of "The Notorious RBG," here are 5 of the most influential cases she ruled on during her tenure on the nation's most distinguished bench.

In 1996, the Virginia Military Institute (VMI) remained the only exclusively male public undergraduate university in the country. The United States brought suit against Virginia and VMI, citing that the university's exclusionary admissions policy was unconstitutional as it violated the Equal Protection Clause of the Fourteenth Amendment. Upon reaching the Supreme Court, the state of Virginia argued that women were not physically adept enough to withstand VMI's intensive training regiments. The state also asserted that the creation of a separate military program at a women's university was an adequate alternative to offering women admission to VMI. The Supreme Court ultimately struck down VMI's gender-exclusive admissions policy and argued that gender equality is a right guaranteed for all Americans. In the majority opinion, Ginsburg wrote that "Generalizations about 'the way women are,' estimates of what is appropriate for most women, no longer justify denying opportunity to women whose talent and capacity place them outside the average description.

Justice Ginsburg delivered one of her most notable dissents while presiding over a gender discrimination case in 2007. Lilly Ledbetter sued her employer, Goodyear Tire and Rubber Company, for paying her less than her male colleagues. Ledbetter argued that Goodyear violated Title VII of the Civil Rights Act of 1964 because the discrepancy in pay was gender-based. Goodyear argued that because Ledbetter did not file her complaint within the allotted 180 days, her claim was null. Although the Supreme Court ultimately ruled in favor of Goodyear, Ginsburg's blistering dissent brought national attention to the gender wage gap. Ginsburg translated her dissent into a more comprehensible version which she used to pressure Congress to craft legilsation in response to pay discimination. Because of Ginsburg's persistence, Congress drafted the Lilly Ledbetter Fair Pay Act, which makes it easier for workers to challenge unequal pay.

During her tenure on the Supreme Court, Justice Ginsburg has proven to be an ardent supporter of a woman's right to reproductive healthcare. In 2013, the Texas Legislature passed House Bill 2 (H.B. 2), which placed strict limitations on abortion providers in the state. Petitioners argued that H.B. 2 "denied equal protection, unlawfully delegated lawmaking authority, and constituted arbitrary and unreasonable state action." The court ultimately struck down the bill in a 5-3 vote, and although Justice Ginsburg did not write the majority opinion, she expressed her thoughts in a concurring opinion. "When a State severely limits access to safe and legal procedures, women in desperate circumstances may resort to unlicensed rogue practioners." She added that "laws like H.B. 2 that do little or nothing for health, but rather strew impediments to abortion, cannot survive judicial inspection."

Even before her nomination to the Supreme Court, Ginsburg was a steadfast proponent of gender equality. As a lawyer, she argued multiple gender discrimination cases before the Supreme Court and wound up using her previous precedents to argue in favor of legalizing same-sex marriage. In 2015, multiple same-sex couples sued their respective states to challenge the constitutionality of banning same-sex marriages. The plaintiffs argued that their states violated the Equal Protection Clause and Due Process Clause of the Fourteenth Amendment as well as the Civil Rights Act of 1964. Justice Ginsburg joined the majority in siding with Obergefell 5-4, granting same-sex couples the right to marry in all 50 states.

This court ruling, which partially dismantled the Voting Rights Act of 1965, provoked one of Ginsburg's most scathing dissents. The Voting Rights Act was enacted to address discriminatory voting practices that historically disenfranchised people of color. Section 4b and 5 of the act stated that counties with defined histories of voter suppression must present all changes to election laws and procedures to either the attorney general or a three-judge panel of a Washington D.C. Court. In 2013, Shelby County, Alabama, challenged the constitutionality of Section 4b and Section 5. Shelby County, which met the criteria for preclearance, also sought a permanent injunction against the enforcement of the act. In a 5-4 opinion, the Supreme Court sided with Shelby County, claiming that the restrictions were outdated and states should set the terms of their own elections. Justice Ginsburg disagreed, arguing that Congress' power to enforce the Fourteenth and Fifteenth Amendments included the enforcement of legislation like the Voting Rights Act. "Throwing out preclearance when it has worked and is continuing to work to stop discriminatory changes," Ginsburg wrote in a blistering dissent, "is like throwing away your umbrella in a rainstorm because you are not getting wet."

POSTED IN politics, womens rights, TRENDING, In the News