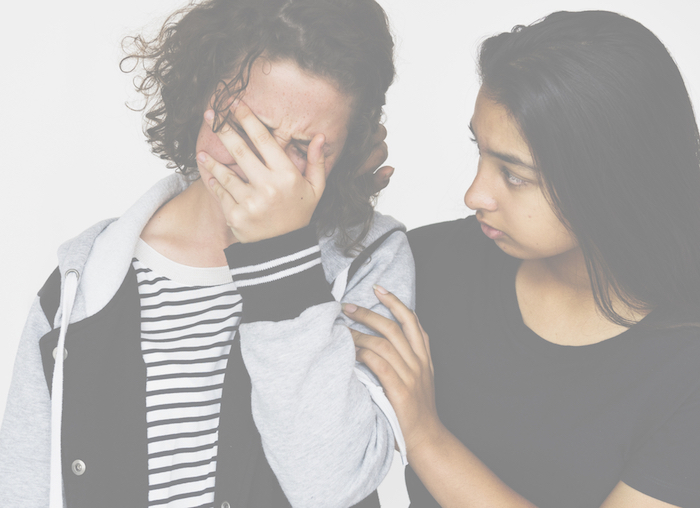 It's been just over a week since a suicide bomber targeted a crowd of concertgoers as they were exiting an Ariana Grande show at Manchester Arena in Manchester, England. 22 people were killed by 22-year-old Salman Abedi and dozens more were injured—many of them young women and girls. All of the victims have been identified, and The Guardian reports that the youngest known person to have died was only 8 years old.

Coming to terms with heartbreaking news like this is not an easy feat, and senseless acts of violence can leave one looking for answers to impossible questions. If you're trying to sort through your emotions in response, as we all are, here is some advice that may help you.

Don't keep your grief bottled up
We all struggle to find appropriate words after tragic events, but you should still try to confide in someone you love. Releasing whatever heartache or sadness you're experiencing often proves to be cathartic. While it can be difficult to articulate complicated feelings, there's no reason you should have to wrestle with this news by yourself.

For teen girls, and many adults, attacks such as these send the message that "you never know what to expect," explains Dr. Dana Carretta, a psychotherapist from Westchester, NY. "Conversation about those fears is what helps the fear lose its power," she says. So consider approaching a guidance counselor, a relative, a teacher or a close friend to talk.

If you can't think of a trustworthy confidante, you can text HOME to 741741 to get in touch with a trained counselor through the free, 24/7 Crisis Text Line (CTL). Though you might feel hesitant to reach out, don't. CTL has assisted over 38 million people just like you also looking for a little bit of guidance during tough times.

Recognize that you're not alone
You might be thinking: "As awful as this tragedy is, I've never met these victims and they lived halfway across the world from me. Why am I feeling their loss so strongly?" If you're surprised or alarmed by the intensity of your feelings, be aware that it is completely normal to grieve for people you didn't know. In this age of social media and communicating easily with citizens of different countries and public figures, your reaction simply means that you are a member of our global community. Realize that millions (if not billions) of people around the world are mourning for these innocent victims just as you are.

Remind yourself of the good in the world
Some believe that the Manchester bomber intentionally chose to target young girls, which might cause you to feel the pain of this incident even more strongly. Don't lose sight of the fact that, despite those who might try to harm women and girls, an ever-expanding community of female advocates and leaders remains strong and increasingly powerful. 15 new women were sworn into Congress this past January. Groups that help women run campaigns for public office are experiencing an unprecedented spike in interest. In fact, over 13,000 (!!!) American women have decided to pursue positions in government and politics since the beginning of 2017. Assembling a list of female role models will inspire you, and might give you some of the strength you need during this distressing time.

It can also be helpful for your well-being to seek out and support positive things that are happening for women around the world. Emma Watson's HeForShe campaign with the United Nations reports over 1 billion actions on behalf of gender equality. Female education initiatives like Michelle Obama's Let Girls Learn program are making progress every day in their fight to expand girls' access to schooling and learning resources. Organizations such as The Bill & Melinda Gates Foundation work tirelessly to bring family planning services to hundreds of millions of women worldwide, while Girls Inc. makes it their mission to inspire all girls to be strong, smart and bold (just like you!). If you're feeling sad and looking for a pick-me-up, you can find one of their empowering events near you at this link. You can also take comfort in the fact that Ariana announced today that on June 4, she is putting on a concert in Manchester called One Love Manchester that will benefit the victims of the attack and their families.

Spread random acts of kindness
Martin Luther King, Jr. once said: "Darkness cannot drive out darkness; only light can do that. Hate cannot drive out hate; only love can do that." By making people's days a little brighter, either through compliments, small gifts, giving favors without expecting anything in return or just simple, kind words, you'll be doing your part to drive out the hate in the world. Is there someone you've been meaning to spend some time with lately, but you never get around to it? Give them a call. Have you told your parents and your other loved ones how much you appreciate them recently? That might be a good idea, too.

Looking to do something that will directly help victims of violent attacks like this one? One of the easiest ways to contribute something hugely positive in the world is donating blood. Just as the injured concert-goers were rushed to various British hospitals after the explosion, millions of Americans need medical treatment each day, and approximately 1 out of every 7 will need a blood transfusion. See if you're eligible to give on the American Red Cross's website; if you're not old enough yet (or don't meet the criteria for other reasons), you can *still* make a difference. By volunteering, running a blood drive in your community or at your school and spreading awareness about the benefits of giving blood (both online and among your friends and family), you can help save countless lives.

Please feel free to share your feelings on the bombing in the comments section. We want to hear from you.