Zendaya, Raven-Symone, is that you? 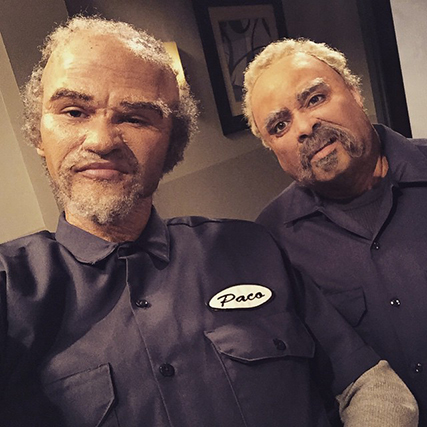 Back when Raven-Symoné was rocking Disney Channel with her hit show That's So Raven, she was always donning hilarious disguises. Zendaya's no stranger to ridiculous costumes either, featuring all sorts of wacky looks on her new spy show. When we heard Ray and Z were teaming up for an episode of K.C. Undercover, we should've figured the two would end up wearing something totally nuts.

Though we expected lots of laughs out of this collab, we couldn't quite predict this. In a picture shared on Raven's instagram, the two celebs are wearing some serious hair and makeup to make them look like old men. We almost don't recognize them. "Had the time of my life on the set of #kcundercover. Bringing back memories of the days I used to work a 8-10(yea 8am to 10pm)," Ray captioned the pic. "So much fun. Don't know who is who?! Lolol I'm on the right, Z is in the left. Hehe!"

Could you tell this pic was of Raven and Zendaya? Are you as psyched to see Raven on K.C. Undercover as we are? Share your thoughts below.